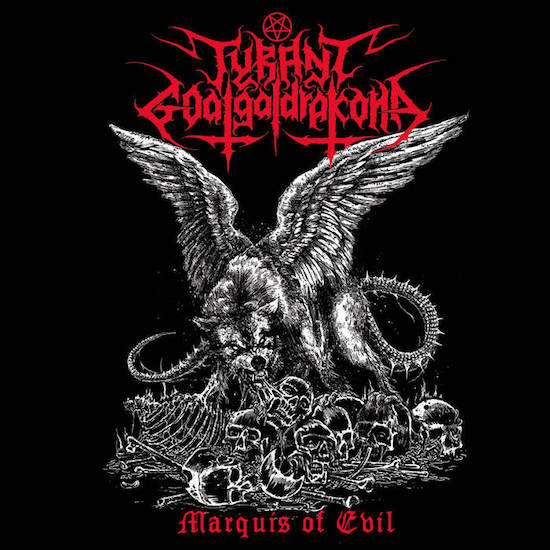 Been a supporter of Hungary's Tyrant Goatgaldrakona since finding out about their 2013 debut full length Horns in the Dark. That record aged beautifully, I could pit it against current remarkable albums, and it would emerge victorious. The presence Horns in the Dark creates is truly hostile, it’s a record you need to hear if warlike black/death metal is your tune. An EP followed 2 years later that aroused the same feeling Horns in the Dark did and that was about all I had heard from the 2 piece since. Four years later we get yet another short menacing EP titled Marquis of Evil. Two songs of more tyranny from the unit, utter darkness, violence and chaos smears the arena, another miasma of desolation is set to radiate from Hungarian shores through Blood Harvest Records on October 25th, 2019 this time through ‘Conspiracy with Marquis’ and ‘The Seventh Throne’.

This is the same band I am familiar with that is now getting the recognition they deserve; these two tracks bring the fury Tyrant Goatgaldrakona is known for but also an air of doom encircles the recordings to smear the carnage of the assault. All that you know the band for is active; frenetic guitar work, woe-full death metal growls and blast beats knocking to the trumpet of tyranny. If this is a warm-up or a taste of full-length material soon to come, then arses be lit on fire, and dance to the glory of the unholy that awaits. And that artwork, oh my, excellently sums-up the omens to be heard. What a treat to have after such a long time; they have come quite a distance since their 2010 debut EP Sign off Moloch, and it’s a joy to know they are in league with Blood Harvest Records. Marquis of Evil will have to do until more tyranny comes along, but I can tell you this, it’s getting ever so hard to withstand my restlessness.

It's good to know one of my favorite underground extreme metal bands are at work and are strengthening the still growing Hungarian metal environment. Tyrant Goatgaldrakona are for me among the front runners of Hungarian underground extremism though just being at the beginning of their climb. Don't pass-up Marquis of Evil get it on vinyl and what other available formats it's on.