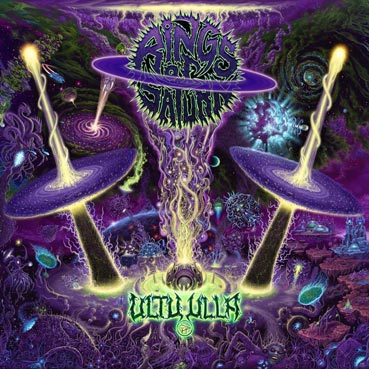 There's no doubt at all that this is the band's greatest work. This band has had a lot of dislike and hate over the history of their formation, which they don't deserve at all. Their first 3 albums were either a love or hate matter, but when Ultu Ulla came out people seemed to mature up a bit. This album is far more organized, thought out, professional, and written in a great manner. People that used to hate ROS will like them even just a little bit after hearing this album. Rather than all the alien-core-y stuff they mainly focused on in their past albums, here on this album they focus more on the music; the skill and the way it's presented, and they did a FANTABULOUS job here.

A ROS album can't start out more perfectly with a track like 'Servant of this Sentience'. Like holy shit man, that guitar part right when the song starts, literally godlike. Such glorious tap riffing! Holy crap! It's the perfect way to show how the rest of the album is gonna be like, and what the atmosphere will be like. Perfectly "space-y". They of course still keep the "aliencore" aspects of the music in here, but they make it even better by adding more complex riffing, song structures, and drum patterns. The drummer Aaron Stechauner's only studio album appearance in the band is amazing. Obviously the best drummer they've ever had at this point in their discography. With a complex drummer like him there's no doubt at all that this will flop. The drum sound also fits with the guitar perfectly, these drums are pretty much the ideal deathcore drum sound overall.

Every song on this record is beyond creative, everyone is something new and spontaneous. Some tracks are straight up brutal, some more structured, some has tons of variety, and some are instrumental. The variety of this album is great if you ask me. It's awesome how a band like this can also write amazing instrumentals as well, especially ones with atmosphere! For example, they go from making tracks like 'Parallel Shift' and 'Immemorial Essence' to making tracks like 'The Macrocosm'. Obviously this band has the creative ideals very much in stock. Brutal alien songs to peaceful and atmospheric instrumentals?? God damn.

People will complain about the overall sound of this album in general. "The guitars suck!! They used triggers on their drums!!!" Blah blah blah, they'll literally find anything at all to hate about this band which is pretty pathetic. Only true music appreciators will recognize the greatness ROS offers in their music. The sound of the drums goes along greatly with the guitars. This isn't exactly my favorite drum sound, but for this album it 100% works and flows with all the other instruments. This here is one of those records that shouldn't be changed at all. Any tempering with this album would strip it of all its greatness.

Vocal performance is also of course still great and necessary. Ian is a great vocalist, especially in deathcore. He can range from deep guttural growls, burps, snarls, etc. to screams, and his screams are magnificent as well his deep guttural vox. He can go from deep gutturals to high screams on command. This man never fails. Whatever vocals you have in mind, Ian has definitely got it. Very impressive if you ask me. For a band that talks about alien life forms, invasions, conspiracies, and makes music this heavy, you'll obviously need vocals that are as equally the same. You can't have heavy music without heavy vocals; VERY MUCH SO in deathcore. On this release, all the music aspects along with the songwriting are some of the most advanced EVER. Every single detail is complex and lives up to its name. This band just defines creative talent.

In conclusion, Rings of Saturn's 4th studio album. Amazing musicians with a great lineup, all songs are creative, varied, and special in their own ways, the guitars are exactly how they should be, the sound of the drums are set to perfection; just right for an album like Ultu Ulla (or deathcore in general); the drummer's playing ability is also extremely talented and persistent, and you got Ian's vocals to back all that glory up. Us fans couldn't ask for anything better. This album proves seriousness, these guys don't mess around when it comes to writing great music. This album definitely does define something that would be called "Rings of Saturn".