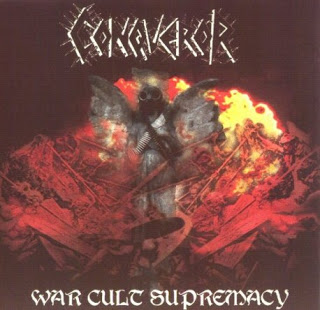 Conqueror. A band that went about as fast at they came. With only a couple of demos, a split, and a single full-length under their belt, Conqueror's time in the sunlight was very brief, forming in 1996 and dissolving only a year later. However, the impact that James Read's and Ryan Förster's short lived project left on the scene they were part of is, safe to say, indelible.

Conqueror was a band whose leaders had very clear intentions in mind: to be the most intense, cathartic, and earth shattering band on the planet. Though they were only active as a group from 1996 to 1997, not a stone was left unturned, nary a segment of the ground they walked upon left unscorched from their merciless, nihilistic war machine. The devilish duo who made up the group hail from Canada, one of whom is the basis for the legendary war metal act Blasphemy, and whose influence would be felt throughout the scene with bands like Black Witchery and later Revenge, who would later form from the blackened ashes of Conqueror's demise a few years later.

Bands like Sarcófago, Bestial Warlust, Beherit, and Archgoat were pioneers in their own right for taking black metal in a darker and heavier direction. They stood out from bands like Venom that were playing speed metal with Satanic lyrics and an atmosphere that felt more like a drunken party of cooked-up debauchery by a bunch of assholes cheering “Hail Satan!” and “Ave!” all night long. The aforementioned bands created an atmosphere and sound that was almost unheard of at the time. Chaotic, raw, viciously uncompromising black metal with death metal and grind influences that would later come to be colloquially known as “war metal.” However, I feel that it wasn't until Ryan Förster birthed the beast known as Blasphemy and, with it, the seminal Fallen Angel Of Doom.... in 1990 that war metal was truly born. The very militant and aggressive Satanic lyrical stance other bands were writing was taken to an even more extreme place. Their lyrics continued to evoke very aggressive Satanism, while anarchistic violence, war, hatred, and a Social Darwinist bent was added, further molding the sub-genre into something that could be uniquely identified as its own thing.

Cut to 1996. Read and Förster form Conqueror and record their one and only full-length album. However, due to circumstances beyond their control, the album falls way behind schedule and is instead released in 1999. I doubt the music had anything to do with it because let's be clear here, the people running the labels involved in distributing this thing were definitely listening to Sarcófago and Beherit before this came along. Make no bones about it. But if we're being honest, War Cult Supremacy is a beast of its own creation (and its own destruction). While the previous bands are renowned for turning black metal completely on its head with their more absurdly fast and aggressive method opposite of what bands in Europe were doing, Conqueror just said “fuck all of that” and chose to outdo EVERYONE!

Saying this album is brutal is an understatement and, quite frankly, an affront to that word. This album is the undefeated heavyweight champion of intensity, absolutely running roughshod over any and all competitors who dare to challenge it. It's sheer savagery and uncompromising violence in sound form. The songs themselves will be impossible to pinpoint on the first listen, the second listen, or even the third listen as they are incredibly noisy and fast and rough-sounding. I can't really pinpoint specific examples where riffs truly stand out because this album's production doesn't give me the opportunity to do so. Even though I've listened to this album at least a dozen or so times since I got it and am able to make out everything that's going on, it doesn't make it any less difficult to discern the riffs and the absolute sonic batterings. Guitars and the mostly screeched vocals are pushed back in the mix while the drums are delegated to receive the best treatment as being relatively clear in comparison to the rest of the instruments here.

Let's break each instrument down. The drums and vocals are handled by James Read. Both here are utterly maniacal. Read's drumming might not be the most cohesive ever – in fact, it's pretty sloppy if you're paying any attention to the songs – but the raging compassion and aggressiveness inherent really makes me look past whatever flaws exist therein. Literal constant blasting in the majority of every song, fills, rolls, double bass and drum patterns so dizzying that you'll be seeing doubles just trying to keep up. There are occasional moments where he slows down like halfway through 'Chaos Dominion (Conquer the Enslaver)' or towards the end of 'Domitor Invictus'. Both songs have those moments where Förster's guitar can be heard a bit more clearly and riffs are more distinguishable. These moments are few and far between, though, so do not cry too much for variety because it just isn't here. Not much can be said in terms of variety when it comes to the vocals, either. It's mostly indistinguishable, inaudable screeching and screaming throughout. They're chaotic beyond any measure or metric of comparison. I'd say imagine a volcano erupting, but Read's vocals are so directionless and frenetic that I don't even think the might of Mt. Vesuvius could match the destructive currents of this man's voice. Trust me when I say that they do NOT get old or boring. Read throws just enough tricks (which are maybe one or two at best) to keep the listener engaged so monotony doesn't set in after the first song. Double tracking, distortion, warbling, and all kinds of effects are used frequently to make his voice even more frightening than normal.

Ryan Förster handles guitar and bass guitar duties. The bass guitar is barely audible. It barely plays a part in this frantic madness. It's mostly the guitars that we're here to talk about. In total fairness, they're barely audible, too. It seems like this album got the same treatment as "Fallen Angel Of Doom"..... Everything is pushed to the background. The difference is that there's a punchiness and weight that "FAoD".... didn't have. The guitar sound is thicker and fuller here, making it sound way more chaotic and warlike when put back-to-back with Blasphemy's debut. There, the guitars are thin and tinny, which I feel kind of robs them of some of the destructive power they could've had. The solos that are here really come and go in a flash, sticking around for a second or two or three before fading into the wind tunnel that is this album's ferocious sonic battering. With enough complete and thorough listens of this album, it'll become possible to distinguish riffs from each other and point out favorites. Whether or not this is even possible is up to the level of commitment willing to be put in to finishing a titan like this.

It's incredibly difficult to recommend this thing. If you're a fan of bands like Sarcófago or Beherit or Archgoat or Blasphemy or Revenge, then this album is for you. All I can say is enter if you dare and prepare for the most savage, most brutal, most unrelenting beating of your life.