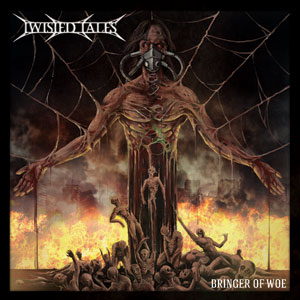 Bands from Serbia did not appear on my radar for a long time. Fortunately, things have changed and The Stone, Space Eater or Zloslut have proved the metallic heart of this country. Yet this does not mean that I accept everything that comes from Serbia. It sounds strange to me that Twisted Tales have released a new album in Serbia which will be released globally on the 20th of September, because... forgive me... it is only a digital release. So, for me, the Nuclear Assaultian analogue man in a digital world, they have actually released nothing at all. What weird kind of album is this that I cannot hold in my hands? Go and seek a record label for a physical release instead of telling me, well, twisted tales about a product I cannot see.

Either way, Twisted Tales dish up a bastard of thrash and death metal. The thrashing elements prevail, but the vocals, for example, have a growling touch that rather points into the deadly direction. Details aside, the compositions have a solid substance. Even after a silent period of seven years after the last album, this is anything else but a matter of course. I know a band that is not able to release a substantial full-length after a break of more than two decades. Indeed, even the metal universe is no Sacred Reich. Yet it seems that Serbia is a hotbed for extreme metal, because Twisted Tales join the ranks of promising bands from this area. Some great tunes prop my thesis.

"Father", for instance, draws the listener into the song in a matter of seconds and its main riff sends greetings to Melechesh. "Trapped Under Glass" thrives on its very cool and simultaneously sharp guitar work. The main riff of "Open Your Eyes and See" is also excellent and the shredding one-tone-parts lend the song a kind of hardcore feeling. Open your ears and listen, that's my advice... Not to mention "Misanthropia", a late highlight with expressive guitar lines and a fine mix of staccato-oriented and well-flowing parts, including inter alia an accurately attacking mid-part. Generally speaking, the musicians like rasping guitars in order to create a robust degree of harshness. Sometimes the songs must be put under the microscope, otherwise one will not find any trace element of melody ("Sheol"), but believe me, there exist some melodic fragments.

Unfortunately, the group is prone to an overdose of music. Instead of giving the old less-is-more-dogma a chance, the album clocks in at 58 minutes. Sad but true, the dudes offer almost a handful of half-baked numbers. For example, the programmatically titled "Slow Down" suffers from its creeping chorus. Together with some fast-paced sequences, the song is somehow incoherent. "Hellfire" sounds relatively uninspired until its fantastic mid-part appears where soft guitars introduce a really original solo. But I should not lose too many words about the little weaknesses, because a do-it-yourself combo like Twisted Tales - the band is responsible for the powerful and well-balanced production - deserves my respect and even idealists can fail from time to time. What really counts is that legions of thrash death metal maniacs will fall in love with the majority of the tracks if they only would knew them. Maybe it is time for a physical release?