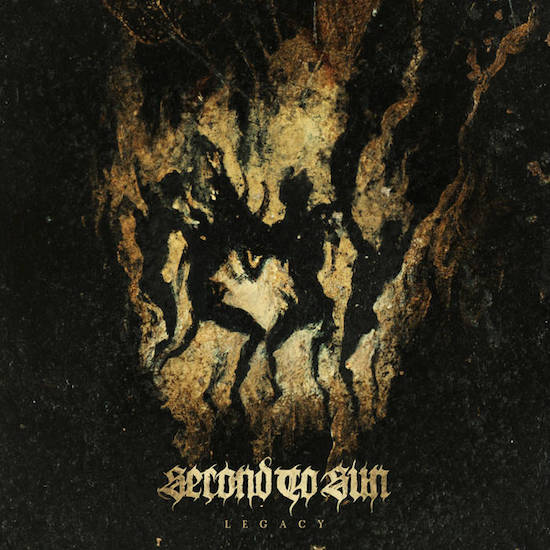 Russian black metal band Second to Sun have been very active since their formation in 2011, managing to put out 6 full length records amidst a slew of EPs and singles. Their soon to be 7th full length effort comes in the form of "Legacy"; black metal fused with plenty of atmosphere and groove. Says they play a bit of post metal too but I hear none of that at all or maybe it's buried, either way I'm glad, because when I see the words 'post' and 'black metal' in the same sentence, I think about that "transcendental" crap that yoga bitches listen to during their spiritual sessions. Second to Sun's latest entry "Legacy" walks a line between, black metal, groove, and a tiny bit of metal-core; surely an offsetting combination; even stranger is Second to Sun started as a raw black metal band, so that's a major leap as far as sound is concerned. After listening to "Legacy" my main takeaway resides within the band's seamless ability to coat and unify their aggression with beautiful atmospheric intermissions and progressions.

I couldn't stand what I was hearing at first due to how much had been occurring at the same time, plus being already turned off about post metal didn't help; however due to the intense drumming and abrasive and raw vocals, I was able to stick around and make sense of what Second to Sun was doing and where they were heading. Hearing 'Devil' was offsetting at first that later became more understandable through the keyboard usage to establish and aura. That method would continue to be utilized as "Legacy" progressed. Their groovier moments began to take shape and effect with the introduction of 'Confessional of the Black Penitent' in so showcasing some of their better mellow and aggressive components intertwined. By now I had become a bit more open-minded to what was being offered on "Legacy". 'Pages for a Manuscript' is precisely where Second to Sun placed the definitive piece of the puzzle needed to exemplify a completionist status. Here they contribute 10 minutes of succinct music, managing to blend all of their now adapted traits into one channeled effort. Melancholic guitar leads and keyboards merged with sharp vocals cast a crestfallen overtone often times challenged by one of anger such as on 'Raida'. From here the outlook of what's to follow was set.

It's still quite a lengthy journey with the exception of 2 bonus tracks I believe are remastered versions of the originals; that's not saying you get bored because Second to Sun apply their multi-layered instrumentation to commendable effect. The compositions here are fluent when merged, that when put to the overall concept and lyrical themes of "Legacy", add a sufficient complimenting intonation. 'Monster' (which was promoted through a well coordinated music video), 'No Need to be Afraid Now' and 'Raida' commence by dragging the listener into vast landscapes established either by weighty guitars and/or keyboards then in contrast change tempos to amplify the effect through which immersion sets in. The atmosphere is a major element of "Legacy"'s success the way I see it, those transitions to overwhelmingly cold and despondent tones carry the flow by acting as entwined intermezzos. I understand an instrumental version of "Legacy" is also set to be released alongside the original as was the case with previous record "The Walk", thus emphasizing how much work and sacrifice Second to Sun put into the composing of Legacy's instrumentation, it truly stands as something to be experienced separately. As a whole, "Legacy" is a fabulous album still met with the harsh touch of the genre's staple and band's past, thus aptly titled.