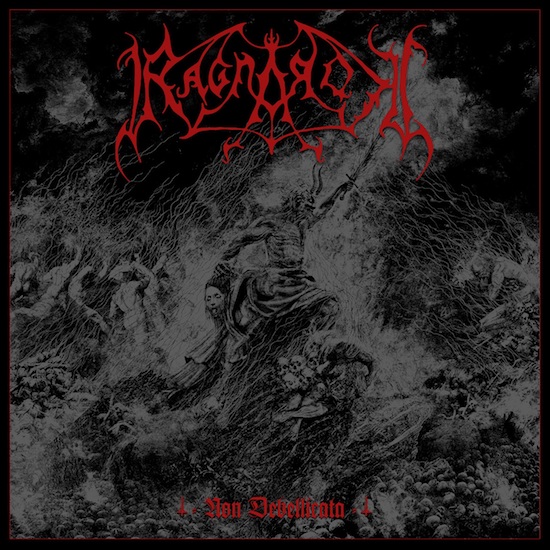 Roughly 2000 years ago, I got in touch with the debut of Ragnarok and I remember that “The Norse Winter Demon” was its atmospheric yet straight highlight, at least from my point of view. Then I lost the trace of the band and when I have a look at the artworks of their full-lengths, it seems as if they followed a rather ill-defined way. All covers display a different style and maybe this erratic approach is one of the reasons why the Norwegians never reached the business class of the global black metal airline.

Now I am confronted with their ninth studio work and honestly speaking, the material does not really draw me into the album. “Sanctimoneous” (typo alarm?!) marks a good example to demonstrate the strengths and weaknesses of the output. A slightly melancholic riff at the beginning is beaten to death like a dog by blast beats and double bass. I don’t have any problem with hyper-fast drums per se, but here they sound mechanized and without any lively component. Atmosphere? Completely missing! A great break after the first two minutes brings an interesting riff to light, but it is immediately blown away again by the next full speed ahead attack. The chorus takes a bath in mediocrity, even though it grows at the end of the song. Finally, an old, wise man speaks some meaningless words and so this stereotype feature has also been integrated. I have some question marks in my head after listening to such a track, but one thing is for sure: that’s not the kind of stuff which makes my pulse run faster.

Ragnarok have no time to lose, they rush through their compositions as if there is no tomorrow. That’s the main mistake they do: they asphyxiate their good riffs in a matter of seconds. “Nemesis”, for example, starts promising and ends in a soulless high-speed orgy. Whenever the riff shimmers through the uncompromising hammering, one gets the indication that Ragnarok are actually able to write great tunes. Too bad that they don’t do it. Given this situation, the uniformity of the material makes it stressful to listen to the entire album continually. I just move hand over hand from one break to the next in order to enjoy the short moment where the guitars deliver not just pure noise. But Ragnarok don’t play progressive math core and so the number of breaks remains on a rather low level with the effect that the album cannot convince.

Everything else, the hateful voice, the icy leads and the thundering production, is no crucial factor for the evaluation of the album. Ragnarok’s work lacks emotions and character, as much as I regret it. Of course, black metal should be relentless and violent, but this form of one-dimensional execution just fails. Maybe the band has lost its compass – the fact that they will be on tour with a death metal combo supports this proposal. And now I go back to “The Norse Winter Demon”.