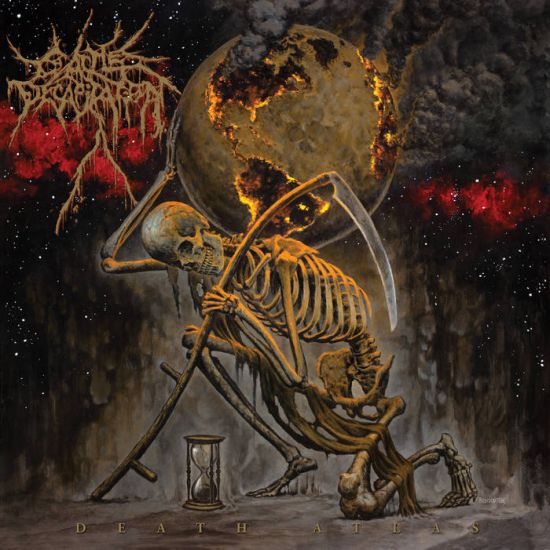 While Cattle Decapitation has always been a band I have followed, they’ve never been a band I’ve truly ever loved. While I do enjoy a large bulk of their work, and appreciate what they stand for, I often times find myself listening to other things. So, if you’re reading this review with the hopes that it will be nothing but praise, then you are not familiar with my reviews, and would only advise you to keep reading if you simply enjoy reading about music.

In all honesty, I was excited for this album. A four-year gap between albums is a large amount of time for any band, but especially large for a death metal band. Their previous effort, the brilliantly titled The Anthropocene Extinction was quite an enjoyable album, so with the time gap in between I was really looking forward to Death Atlas - and adding Olivier Pinard to the ranks (Cryptopsy) didn’t exactly hurt my interest, either.

I hate it when albums have long intros that fail to hold my interest. “Anthropogenic: End Transmission”, is exactly that. Two minutes and fifteen seconds of my life I will never get back. However, once “The Genocide” kicks in and disrupts my boredom from looking at my wall, the first thing I had noticed was that this album sounded great. From a production, mix and mastering point of view, I think this is one of the best sounding death metal albums I’ve heard in a while. So that at least, should make this album far more enjoyable and easier to digest. It’s hard to digest an album if you can’t hear what’s going on half of the time.

Cattle Decapitation are more melodic now - take that as you will. While it works in some places, in others, it really doesn’t. First things first, there are far too many clean vocal passages now. What made them great before is that when they would come along, it would be a surprise - something of a little event to look forward to. Now that they are commonplace, it takes away from the impact of having those sections. And I don’t know how much I enjoy Travis singing in his - what I call - pedo-voice. It gets tiresome after a while. You know those songs when the drummer just blasts his way through the whole thing? Yeah, that’s not exciting or creative, that’s just lazy. Blast beats work far better when utilized properly and effectively in a composition. So, there is your analogy of what I’m trying to say.

But don’t get me wrong, this is not a bad album. Far from it. The guitar work and sheer riffage provided by the outstanding Josh Elmore is truly a joy to listen to. Devastating guitar work can be found throughout the album, varying from simple, to quite complex sections. And while it may sound like it at first, Cattle Decapitation isn’t really a complex, technical band. Those who are not familiar with the genre may think so, but really, they’re nowhere near Cryptopsy level of craziness. In fact, these guys are ironically better when they play simpler, tighter riffs. Those always have the most impact. While they are also good at playing fast (which they should be by now, considering how long they’ve been around), they are much better when they lurk around the 140-bpm area. Take a song like “Finish Them”, for example. It consists of a very basic, simple idea, but it’s executed brilliantly. The idea is to take a simple, easy, grooving riff and to see how far you can take it. And even though it has those Travis Ryan pedo-vocals on it, it’s a juggernaut of a song, simply one of the best on here.

Other highlights include “Vulturous”, because it has quite a few different sections, many of them which are interesting. Even the lame guitar solo doesn’t really take away from the impact of this track, which is impressive. And those who are bothered by the lame guitar solo remark, well then too bad. Just running scales up and down in guitar solos should very well indeed be ridiculed, because that’s just lazy composition.

The album overall I would say, was worth the wait, simply because of how good it sounds. And while some things may not be to my personal preference, I will not deny the band the respect they deserve when I say that they are a collection of awesome musicians, and this album is a very valid entry into their discography because of the sheer number of musical ideas offered on display here. I could do with less clean vocals, but some people may prefer even more. I liked the band when they were a tad less melodic, again, some may even find more melody as a welcome to their arsenal. Whichever side of the fence you’re on, there’s no denying the level of skill these musicians bring to the table. The drum performance provided by David McGraw is phenomenal, and the bass provided by Olivier Pinard I can safely say, has been a welcome addition to their sound. Josh as I said earlier, does what he does best, and brings a variety of different ideas and themes to this album. Travis Ryan, whom we all know to be a great vocalist, is just that - a great vocalist. The range this guy has is one of the best you’ll ever hear in this genre of music.

With all that said, Cattle Decapitation will certainly continue to live on my radar. However, until that time comes, I will be listening to Monolith of Inhumanity instead.

Cattle Decapitation are and will always remain one of my favorite death metal bands of all time. They don't have ONE bad album, I enjoy everything these guys have put out, a flawless discography in all honesty. When they announced their 8th full-length album Death Atlas earlier this year, I was pretty excited. The first single they put out, 'One Day Closer to the End of the World', was incredibly great. It still had elements from Monolith of Inhumanity and The Anthropocene Extinction, but it was also different, it has deathcore vibes but at the same time it isn't deathcore. It's something new, something fresh put onto the table.

I enjoyed that single for a long time, then the other singles came out. 'Bring Back the Plague' was just alright, as I enjoyed 'One Day Closer...' more. Then shortly after that they put out the title track as a single. It was pretty cool, 10 minutes of some new stuff. The other two singles were also good, but I didn't enjoy them as much as I did with 'One Day Closer to the End of the World'.

The full album finally came out and I went to see if all the hype was worth it. In my opinion it isn't really worth all the hype but that doesn't mean it's a bad album, it isn't at all.

As I said earlier, with this album, the slightly newer Cattle Decapitation are changing their style a bit and trying out some new things, so this album is definitely something newer. For starters, they start to focus on more melodic playing and vocals, just melody cranked up to a 10. There's far more less technical stuff on this record, as it's replaced by melodies. Especially the vocals. Travis does less gutturals and more of his trademark "goblin" or "alien" type vocals, and it's everywhere on this album. The guitar playing is also something different, it's again, melodic, instead of technical or swift, sudden riffs and parts. Same with the drums. There's more double kicking and constant blast beats more than there is anything else he does. On previous albums Dave was far more technical and complex with his playing, with many furious blast beats and crazy speedy fills, cymbal chokes, etc. This album is a step down from his usual playing, which I'm not really a fan of. Drumming isn't bad, I just don’t like the lack of technicality. The only song that I've seen that still has some of his usual drumming is 'One Day Closer to the End of the World'. And as you already may know, that's one of my only "loves" about this album.

Everybody on this album does their part good. Good vocals, guitar playing, drumming, etc. It's all good musicianship. The issue I have is that I'm constantly waiting for something to happen. The song structures tend to repeat a lot. I'm searching for something to grab my attention and pull me in, something to make me go "Woah! This is fuckin nice!!!"; but it's not there. As I already said multiple times, the only wow factor here for me is yet again, the 'One Day Closer to the End of the World' single.

Obviously bands change as they progress onwards with albums, change can be good or bad. I love that Cattle Decapitation is putting out new material with some change, but I'm not really a fan of it. My favorite album by these guys is Monolith of Inhumanity, that album was incredibly crushing, technical as can be, and every single song is rememberable and catchy. Every single second of that album is awesome and doesn't disappoint. In my opinion it's the exact opposite when it comes to Death Atlas. Compared to previous albums this is a step down.

This album isn't bad, I don't hate it at all. I've just found myself not enjoying this album nearly as much as others. When I listen to Monolith... I feel energetic, excited, awesome, everything positive is in me when I turn that album on. With Death Atlas I still get some of that, but way less. When I'm more in the mood for the newer Cattle Decapitation stuff, I tend to enjoy this album way more, but devoid of that I still don’t care that much for this.

In conclusion, Death Atlas is good at best, a solid album but not amazing at all. Again, with previous albums I can remember songs apiece because they're all special and unique, where with this album I can only remember a few songs and just a few little parts of other songs because it's pretty repetitive here. I appreciate that the band is still going strong and put out a new album, but this isn't what I was waiting for. Not really worth all the hype.

Best songs: 'One Day Closer to the End of the World', 'Death Atlas', 'The Genocide', 'Bring Back the Plague'.