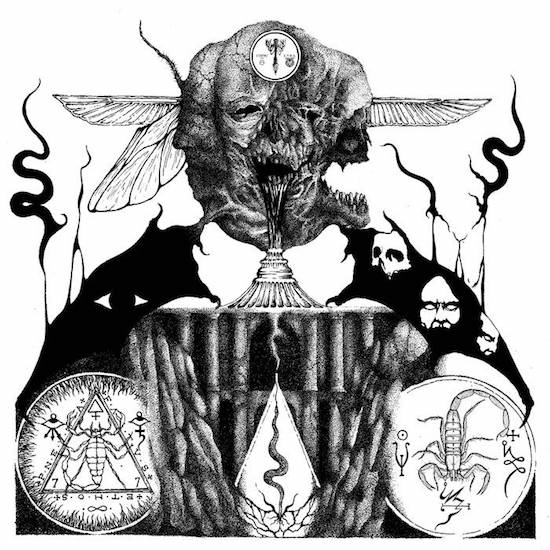 ::   ::
Type: Full-Length
Release Date: October 25th, 2019
Label: Clavis Secretorvm
Genre: Blackened Death, Doom
1 Act I: The Chalice
2 Act II: The Verb
3 Act III: The Lantern
4 Act IV: Nor The Deadliest Disease Shall Be Compared To This Showcase Of Glory...
5 Act V: …For The Children Of He Who Lurks Beyond Shall Not Witness This Showcase Of Glory…
6 Act VI: …Not As Those Who Served And Preached In Obeisance
7 Act VII: Ω De Derelictum Domum Sacrorum
MetalBite on YouTube

So, it shouldn't be surprising that a Venezuelan extreme metal band exists right? Considering the misfortune that that country endures it was just a matter of time for a metal band to use that anger and pain to make metal, and indeed, Venezuela's Cthonica is a very angry band.

This band originally formed under the name "Okkvlt" and released an album in 2017 before changing their name to Cthonica in 2018 for reasons unknown. I wasn't personally familiar with this group until this album was announced by their label Sentient Ruin Laboratories and they certainly check all the boxes for that label. A black/death metal band with a cavernous sound and a lyrical approach to the occult from a very abstract perspective. With all that out of the way, let's talk about this album which is technically their second album but in actuality their major debut. The first thing to note is that this is an extremely unforgiving and punishing style of blackened death metal. The vocals will be the first thing everyone will notice, because they aren't death growls or shrieks, they're gurgling gutturals the likes are more commonplace in grindcore and slam. The music is just as outlandish; this style the band crafted for themselves is extremely noisy and cavernous, which is boosted by a very raw and bass heavy production and to borrow a quote from Mayhem, "the album sounds necro as fuck". It's raw, unflinching and very, very impenetrable even for much more experienced metalheads, and that is also its biggest flaw.

One credit that I will give the band is that they managed to succeed in creating an extremely ominous, perverse and foreboding sound, and were able to maintain that sound consistently throughout the album. While it's hard to notice and pick up, their musicianship complements this very aggressive style, they balance the speed with the sludge, and were also able to throw in riffs, solos and even hooks as well as much more evocative passages where the drums and vocals build up the momentum. The album is certainly not without merits and expertise, but the problem is how all these interesting ideas and experimentation with black and death metal, as well as noise and ambient are hindered by how overwhelming the sum of all these parts is. The extremely raw production and focus on creating a menacing atmosphere buries most of the riffs and hooks, the gurgling vocals are also way to loud and present in the mix, the whole album is a cacophony of chaotic noise which unfortunately cancels out the flurries of brilliance in the music. In many ways this album is an auteur's endeavor, the band's commitment to create the most vile and unflinching symphony of pure, unbridled wrath (again considering this is a Venezuelan band this sheer anger is warranted) and is also their own crutch since the album is extremely unforgiving to even experienced metalheads who would be into music this grim and chaotic. Fans of bands like Portal and Sunn O))) will certainly be much more receptive to this style of blackened death metal as it does fall into those bands' brand of experimenting that pushes metal into new, abysmal territory and exploit the extremity of the genre to its fullest. However, this album is certainly not for everyone else, it is very niche, which I can respect and admire, but at the end of the day, even though I can appreciate the band's dedication, this album is simply too overwhelming and excruciating to bear as a novice to metal this extreme.