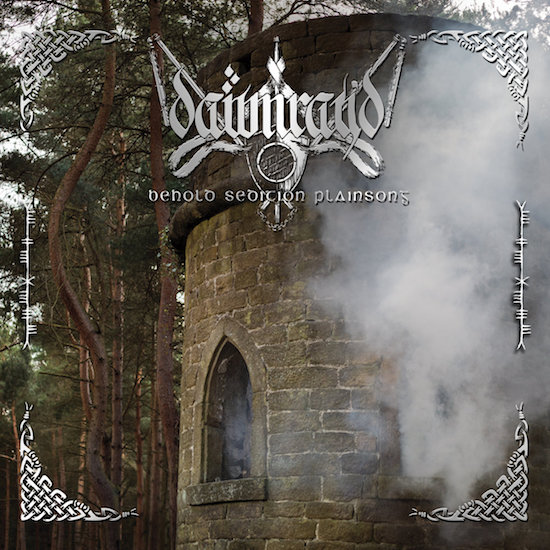 Type: Full-Length
Release Date: October 25th, 2019
Label: Prosthetic Records
Genre: Atmospheric, Black
1 Raise The Fails
2 The Smell Of Ancient Dust
3 Like Smoke Into Fog
4 To All, To All, To All!
5 A Time For Courage At The Borderlands
6 Songs In The Key Of Compromise
7 Until The Forge Goes Cold
8 A Stone's Throw
9 Soon Will Be The Age Of Lessons Learnt
10 Salvation Rite
11 The Curse, The Dappled Light
MetalBite on YouTube

Anarchist black metal band Dawn Ray'd is back. The British outfit who made their splash back in 2017 with the excellent The Unlawful Assembly kicking the door of the underground with a furious blend of raw black metal, punk and folk music have released their anticipated sophomore record Behold Sedition Plainsong and continue their ever wrathful march against fascism and bigotry in a more elegant and refined but no less vicious fashion in what's an easy contender for the best albums of 2019.

Behold Sedition Plainsong continues Dawn Ray'd's now signature style of black metal but this time, with the help of better production, courtesy of Jaime Gómez Arellano at Orgone Studios (producer of Misþyrming, Grave Miasma and more). The most impressive aspect of the production is that none of the grit and rawness of the band's performance is missing, the polish of the production highlights that aggression even more than before, and it also makes the more somber and tranquil parts of the album have more impact. Dawn Ray'd always succeeded in balancing their aggressive brand of black metal with melodic and ambient sections drenched in violin and acoustic guitar folk music. In here that is furthered refined and it also avoiding going into "symphonic" territories by keeping the melodies sorrowful and ominous and the overall combination of punkish black metal with folk and ambient music is marking improvement over their already outstanding debut album.

It's also worth noting that what makes the music as good as it is alongside the bold experimentation is the individual performances of the trio itself. Each and every member unites their individual musical strengths to make the album what it is. Vocalist Simon B. stands out with his howling vocals, his delivery is as fierce as the lyrics he sings about and it displays what every black metal fan would want from the genre but Simon's take on vocals is defiantly aggressive. There's an unmistakable intensity that's in line with the punk spirit and ethos the band embraces, and indeed, these vocals are the howls of an anarchist, leading the revolution against tyranny and injustice. It completely discards the terror and wrath of Satanism and blasphemy often found in black metal, for the wrathful indignation of the oppressed and it blends beautifully and seamlessly with Simon's expert violin skills; the anger of the vocals is balanced by the forlorn violin and clean vocals, as shown in the track "A Stone's Throw", which serves as an introspective track, lamenting the state of the world in between all the anger.

Guitarist Fabian D. and drummer Matthew B. are no slouches either and they're also the ones who carry the lion share of the music, and as I mentioned above. What makes this album's music so compelling is the individual skills of each member; Fabian B. displays the classic riffing and tremolo picking demanded of the genre but manages to add that extra layer of intensity with punkish hooks and most importantly, where he truly shines is with the acoustic guitar. He complements Simon's violin perfectly and he truly shines when going into acoustic harmonies effortlessly switching between the distorted aggression and melodic sorrow and the absence of a bass makes the guitar work all the more outstanding. And as the backbone of holding everything together is of course the drum work of Matthew B.; his blast beats and rhythms are the foundation of all the music, the simplicity and straightforward approach of the drums give it that punk and black metal legitimacy, keeping it primitive and to the point, which also gives him wiggle room to be as fast and aggressive as he needs to. Overall each band member as individuals makes the whole of the album work, it's the perfect balance, individuality and team work, fitting considering the political bent of their lyrics, having a brotherhood of individuals working together to topple empires.

Overall, Dawn Ray'd succeeded in continuing the trail they first blazed in 2017, and made a greater display of their talent and potential. It's exciting to see where these anarchists will go next, because current events are a gold mine for them to write music about.