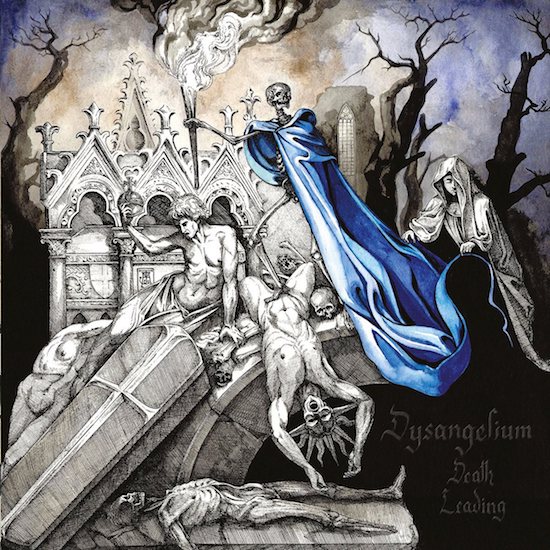 Black metal is still very strong. Thousands of promos announce new deeds of bands of this subgenre each and every week. Sometimes I wish all those distributers out there would not flood the market with their oh so highly anticipated cassettes, vinyl’s and discs, but it is also a big pleasure to find the needle in the haystack. I don't want to say that Dysangelium's second full-length is the only outstanding jewel in the enormous warehouse of black metal, but the Germans are definitely no dilettantes, to say the least. Their compositions have many layers, some unexpected twists and turns, a proper portion of thickness and the diabolic component also does not come off badly. But fortunately, all these details are not at the expense of accessibility. Nobody needs successfully completed studies to be able to orient her- or himself in the sound cosmos of Death Leading.

The material appears as a rumbling volcano, always ready to erupt. This does not mean that the band falls victim to an undifferentiated sound. The production scores with a very direct appearance. Moreover, the voluminous mix has this almost somersaulting element that adds a fine dose of insanity to the raging compositions. Both the music and the technical implementation remind me somehow of "Reign in Blood". Admittedly, Dysangelium do not emphasize any industrial element and therefore their approach is different than that of "Reign in Blood", nevertheless, their songs spread comparable vibes. The reason for this is that the Dysangelium also dish up apocalyptic sequences, a tight interplay and vigorous, ardent vocals. It seems as if the lead vocalist has challenged his comrades in order to find out who is louder, he or the instrumentalists? My Solomonic judgment: this cruel fight ends in a standoff.

However, the combination of his inferno-proclaiming voice and the swirling instruments creates an archaic and mighty scenario that leads directly into perdition. And it is not easy to resist this scenario. Tracks like “Homo Larvalis” offer a lot of facets, from almost lenient guitars to absolutely intense, compressed sections (driven forward by double bass fire or a thundering snare performance that borders on blast beats). This plurality of hellish impressions makes it impossible to remain emotionless. But don’t think that rather mild parts and sheer fury are on a par. The five-piece puts the focus on raging outbursts of unbridled, misanthropic energy. The other parts mainly have the function to increase the dynamic, but all of them can stand on their own feet as well.

The opening riff of the aptly titled “The Great Work” illustrates perfectly that it actually does not need much to draw the listener into a song in a matter of seconds. However, we know that legions of bands fail to enthuse the audience, for example… well, it doesn’t matter. Dysangelium show them how it works and only a neglectable number of sequences does not fulfil highest expectations. In general, the formation celebrates its storm and stress period in a fascinating way. I don’t think that there exists a specific Teutonic form of black metal, but Death Leading mainly reminds me of the works of other German bands – Drautran’s “Throne of the Depth”, for instance. Either way, those who like passionately performed black metal in its pure, ecstatic shape will enjoy this monumental album. It is nothing less than an amazing document of the subgenre’s unbroken, irresistible force – and, by the way, it does not pay tribute to the Norwegian trailblazers of the second wave. Perhaps the third wave has already begun.