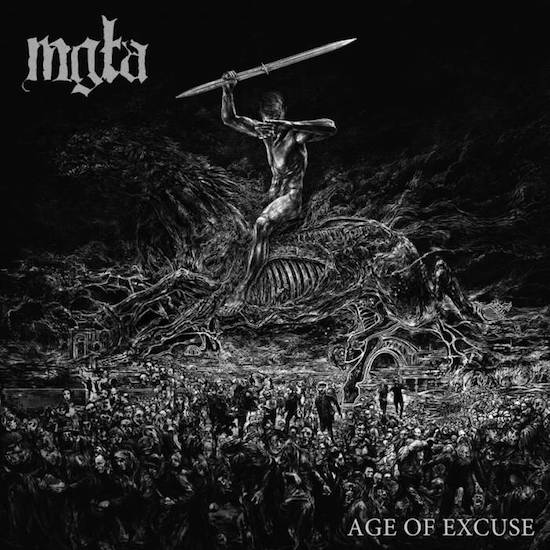 Mgła have proven themselves to be the flag bearers of the Polish black metal scene and have taken the underground by storm. Their trademark style of melodic and gritty black metal have made them stand out and they have returned with their fourth full length album, Age of Excuse.

In Age of Excuse, Mgła continue where they left off on Exercises in Futility, the album that catapulted into the black metal spotlight with a new sense of refinement and even some progressive elements. Indeed, this new LP is very reminiscent of its predecessor, however the band have added more flair and complexity to the music. The compositions are much more dynamic and there’s a stronger focus on creating an ominous atmosphere with moments of aggression as opposed to the direct approach from their previous records. The influence from the band’s members other project, Kriegsmaschine is very apparent and that band’s last album was also a blackened progressive outing with complex and dynamic music. M. and Darkside seems to have carried some of that musicality into Age of Excuse as a sort of seasoning, hence the aforementioned refined style of the music, but make no mistake, this is still very much a Mgła album and everything of what fans want is still present; the cold riffs, complex drumming and sense of dread that only the Polish fog can do.

Drummer Darkside continues to be the main standout of the band. His drumming is as layered and complicated as ever but there’s much more panache and focus added to Darkside’s near robotic precision; he makes full use of the drum kit and gives an every song a distinct rhythm that makes them unique aside from his expertly executed blast beats and double bass drumming. But no talk of Mgła would be complete without founder and mastermind M. who once again handles the lion share of the job by handling vocals and strings. The first thing to notice is the vocals and M.’s unique take on shrieking vocals which on this album take a much more controlled approach; the vocals sound as menacing as ever but there’s a sense of holding the rage inside. In a weird way the vocals sound as if they’re being restrained but you can still sense all the frustration and rage, like a rabid dog that’s collared and trying to get up, which complement the subject matter of the lyrics perfectly, describing a world gone to ruin wherein its inhabitants accept to live in the squalor while a select few try to break away from being drowned in the filth. A fitting and topical concept for our current times. The guitar and bass work continue to be as impressive as ever; the refinement I already mentioned is most present in the string sections, a droning wall of sound to maintain the fast pace which is then broken into dynamic and complex riffs to carry the rest of the song, the grimness and dread of the music lives and breathes on M.’s riffs and masterful tremolo picking. And all of this is accompanied and brought together by the excellent production quality, which only Mgła succeeds in balancing the grit of any good black metal album with the right amount of polish to make it sound great, and as such you get the best of both worlds.

However while this album continues Mgła’s stride of exceptional black metal, it’s major shortcoming is the main problem of all black metal bands, which is the repetitiveness. This is a Mgła album through and through but beyond the added progressive elements and refined musicianship, this album doesn’t stand out that much from either Exercises in Futility or With Hearts Toward None. Make no mistake, this album is a quality black metal album and it does feel like this is the last hurrah of this era of Mgła, but it also has the death rattles of the end of an era, so to speak. Overall Mgła does what they do best but if by the next album they still retain the same sound of the last 3 albums, then most people will move on to the next big black metal band, for sure.