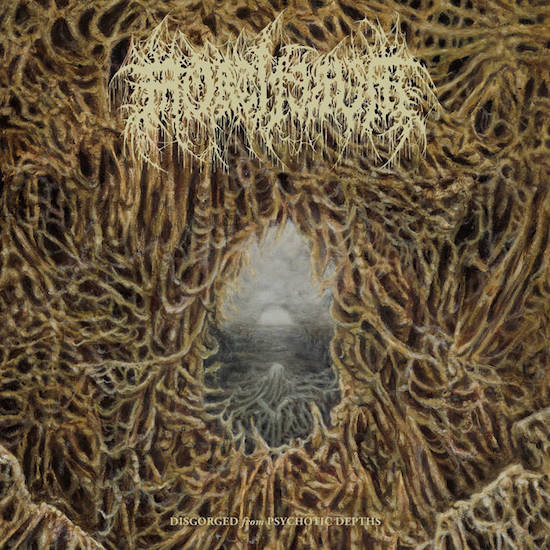 I think by now Mortiferum have developed enough of a buzz that I don't need to introduce them; we've all heard their mind-fuck of a demo Altar of Decay released back in 2017. Simply some of the old school death/doom metal coming from Finland place it in a blender with Incantation and shazam!, you’ve just concocted a tasteful intoxicating recipe. A 14-minute cassette emerged in 2018 spewing more of the bands disgusting leftovers. The call for a new album had been heard by band and label Profound Lore and such has come to be the reality. October 11th, 2019 marks the moment Mortiferum soils the underground with their aberrant visions and sounds with their first full length record Disgorged from Psychotic Depths. Still swirling amidst the lugubrious and nauseating stratum of death/doom metal, Mortiferum discharges their foulest and most hellish hallucinations since their debut.

The moment you hear ‘Archaic Vision of Despair’ you get that qualm Mortiferum have been known to awaken. Their municipal way of playing death metal strikes at the core of the genre still even with their eyes slanted towards the black metal orbit. Mortiferum are big players and they do what big players do, they go big; these tunes tell of a band already making leaps to improve their craft, so-far they’re work has been outstanding. Disgorged from Psychotic Depths takes their old ways of the death/doom metal genre and applies some blackened sketching to its face. Already they have begun to play with their sound a bit in an effort to avoid being lost among the many familiar faces. ‘Archaic Vision of Despair’ is vintage Mortiferum (with a heist in definition) so much that it feels like it was recorded to as a reply to Altars of Decay; the knife wound applied by their demo is reopened and pierced with a swift blackened jab until a hemorrhage of semi-technical/black/death/doom occurs. Lifting its head from the dirt and mold are the guitar riffs and leads, now free to breathe with ease through an emphasis on role and a raise in production. It’s amazing what a few sick riffs could do for a record, and when given this much freedom to dominate the potential is even exemplified.

‘Inhuman Effigy‘ and ‘Putrid Ascension’ are two awesome death/doom metal tracks in Mortiferum’s catalog; hence I was a bit worried they gave us a bit too good of a demo to dethrone by their own hands, but I tell you this is better compared to what was heard on Altars of Decay considerably so. The decision to have a better production this time allowed the members to highlight their talents and show everyone just how good of musicians they actually are. ‘Funereal Hallucinations’ and ‘Faceless Apparition’ are undoubtedly two of the best songs the band has recorded, easily beating anything prior to Disgorged from Psychotic Depths.

The music here is an accurate interpretation of the artwork beheld by the eyes. Staring through the gritty gashed out guts of the genre we see the pale, despair on the other side, a soulless, colorless companion to the surreal disturbia of existence; a gander at the gloomy edifice of doomed eidolons. Perpetrated by the hands of experienced musicians Disgorged from Psychotic Depths forges a bond between crafts and craftsmen, as a bit of personality seeps through the songs, it’s heard through the performances of Tony (Bass), Alex (Drums, Vocals), Chase (Guitars) and Max (Guitars, Vocals), a team effort yes and also an individual highlight. This makes Disgorged from Psychotic Depths sound more than just a debut, it resembles that of a declaration being made before the listener/s in solidifying their position within the genre. The maturity of these musicians has already begun to show spectacularly. Another candidate for album of the year, more-so a virile stride towards developing Mortiferum as an even more devastating faction.