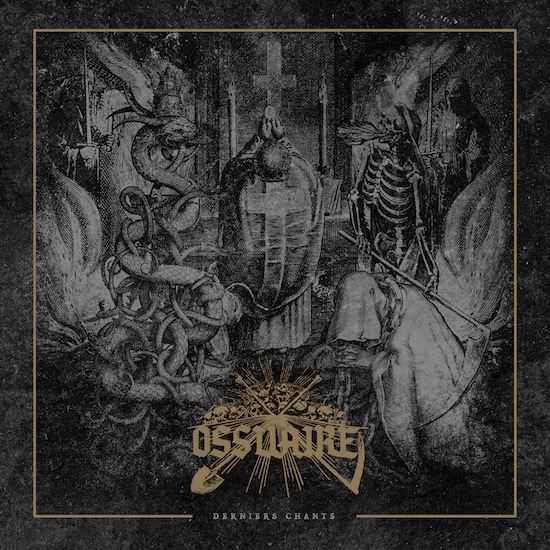 This quartet called Ossuaire did not need much time after their debut, to say the least. Less than six months after Premiers Chants, the next half a dozen songs forms another typical output from Quebec. You know what you get when it comes to French singing bands from this region and therefore we can keep it short. If you like Forteresse or Délétère, you will also like Ossuaire. But this is not to say that the guys lack individuality. Of course, the stylistic frame is narrow and so I am listening to pretty opulent, constantly flowing tracks that avoid abrupt breaks or experimental follies. The album presents the typical dark, evocative contours of métal noir Québécois. Only short sequences interrupt the terrific maelstroms the band creates. The outro of the comparatively slowly advancing 'L’oiel-sang' aims for a pretty melancholic mood and renounces on guitars. Furthermore, the autumnal atmosphere of the beginning of the quasi-title track shows a calm facet of the band as well. Anyway, these intermezzos do not characterize the album.

Ossuaire are doubtlessly aware of the fact that their approach lies in close proximity to those of their neighbouring competitors and consequently they put all they have into the compositions in order to deliver the best songs of this style. Unfortunately, “Thèmes pour la rébellion” is hardly beatable and the same applies for “De Horae Leprae”. Nevertheless, right from the beginning, Ossuaire try to push back all enemy onslaughts. 'Pestilence Rampante' marks a defiant, fresh and belligerent opener that relies on nearly catchy lines and fast-paced rhythms. Its initial guitar tones ensnare the listener in a matter of seconds and due to the very good substance of the guitar work, there is no wish left unfulfilled. The unholy, commanding voice spreads demonic vibes and fits the musical content very well. The opener is simply fantastic and, even better, the same goes for the second and the third song. They also waste no time for useless pauses – their speedy rhythms and the carefully constructed guitar lines give the monolithic pieces a restless appearance.

The material on Derniers Chants scores with its constantly nightmarish visions which are emphasized by the adequate production. The guitars shape the sound, but the voice does not come off badly and the drums also have found an appropriate place. Even the bass guitar is laudable in this not overly clean mix. This is no production which is looking for a frontal collision with the audience, but it reveals a hinge (or even a proper portion) of fatalism under the surface. I admit that the first MNQ albums were an aha-experience for me and Derniers Chants does not cause a similar effect. However, it would not be fair to interpret this fact to the album’s disadvantage. The crucial factors are the high degree of vehemence, the remarkable quality of the guitar lines, the authentic and sinister spirituality and, finally, the coherent overall approach. And one thing is for sure, one will not find many albums with such a strong, multi-facetted and enthusiastic closer. Rest assured, the storms from Quebec have not yet subsided.