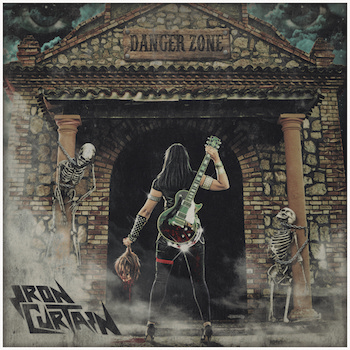 How dangerous is the music of an album whose name is Danger Zone? I put on my steel helmet, entrench myself behind my couch and expect a mix of meanness, velocity and rebellion. The decent opener 'Wildlife' seems to point into the right direction, although the somewhat airy production fails to create the desired amount of pressure. The album sounds a tad like the last survivor of the krautrock movement and its somehow grating guitar tone makes me feel like it is 1972 again. That’s definitely no good omen for the rest of the material and indeed, Iron Curtain – already their name leads directly into the past – perform a style which is far from thrash and it also has not much in common with speed metal. Their songs have a very traditional design, both in terms of structure (verse-chorus-verse) and music. Melodic, rocking elements are gaining the upper hand. I don't hate this approach in each and every case. It always depends on the quality of the harmonic sections. And here we are at the point where Iron Curtain mainly fail.

There are not many parts that keep sticking in the ear and especially the melodic elements suffer from a lack of inspiration. The title track must be mentioned in this respect. It’s loose yet relatively driving guitar work during the verses sets a positive impulse, but the more or less cheesy chorus with its harmless background vocals seems to originate from a single B side of Kiss during the "Psycho Circus" period. It reduces the value of this actually decent number and slowly I begin to realize that maybe I can get out of my hiding place. Despite the nice instrumental ending of the title track, this album does truly not endanger my life. Most pieces are too good to hate them, but definitely also too bad to enjoy them. They sound sometimes decent, mostly toothless and always ordinary.

Is there a market for this cobwebbed kind of music? For a combination of predominantly expressionless vocals and unspectacular guitars? The only original part of the album is the surprising ending of the sixth track. Surprising, but simultaneously somehow confusing due it's totally different atmosphere. Be that as it may, there are also some sections where the Spanish gang sounds like Motörhead suffering from tuberculosis. No nice imagination? That's true, but the biggest challenge is yet to come. The overlong closer "Lonewolf" does not only present a kitschy intro, it also reveals an enormous lack of substance due its meandering guitar solos and the bloodless chorus. The formation crosses the finish line with its last ounce of strength, even though the album already clocks in at 32 minutes. So, what's left to say? Idiots will like the batty artwork and the lyrics are at risk to win the award for the most banal lines in 2019. I have left my shelter, I am hungry and start to make some spaghetti. But at first, I take off my helmet, although it is more dangerous to handle with hot water than listening to Danger Zone.