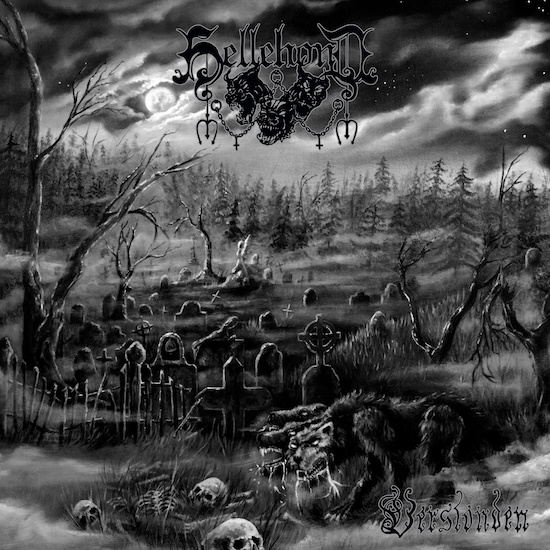 Says "by cavemen for cavemen" which is certainly not the result here; as even a music lover would have no problem listening to Hellehond's debut Verslonden. I can go beyond in saying Verslonden reflects quite a contrasting opposite that the band members may feel either disappointed or pleased with or perhaps both. Their debut Verslonden is decently produced, musically followable and is far from anything caveman-esque. Comparing this to anything cavernous that I have heard is trying to compare Limb Bizkit to Diocletian. Sorry to disappoint the guys in Hellehond but Verslonden is a fairly decent debut album that will appeal to even an average listener of the genre. Primarily second wave pagan black metal produced and played well.

What began as a nod to Burzum's "Dunkelheit" strayed towards its own path on 'Kardoes' bringing you to face the reflection of Hellehond. By the title track 'Verslonden', things begin to accelerate as the moderate tempo heightens to accommodate the louder vocal pitch. While this pace would be exceeded sporadically for instance on 'Rattenmantel', Hellehond make sure to amend their produce with fluctuating tempos and different tremolo picking patterns. This is the primary blueprint of Verslonden and Hellehond's method as it stands; certainly not an attempt to bring change to the genre, because what is offered here is safe, never ventures outside of the friendly zone to do anything offsetting, just walks the white line of the sober. Many bands have replicated this; therefore, it would be unfair to over-credit Verslonden for just following the pack. However, their way of going about things calls for some attention particularly how Hellehond manages the flow and climax of the songs with progression. Rather than sounding separate, the entries appear attached thus forming a mutuality between the songs, yes songs, they're structured well enough to earn that description too. Celtic Frost has its mark on some sections of 'KerKerlust' and some black thrash metal makes a late entry on Verslonden in closing.

Consequently, there's not much to extract from Verslonden instrumentally and even suggests that through its short stretch of 28 minutes. That's not to say the music is bad, as stated before its enjoyable; however, it’s been done one too many times and would go over better on someone who is rather new to the genre or just likes black metal attired in this fashion. But for someone that has heard records far more intense and riskier than Verslonden, it is understandable the listener/s would feel underwhelmed.