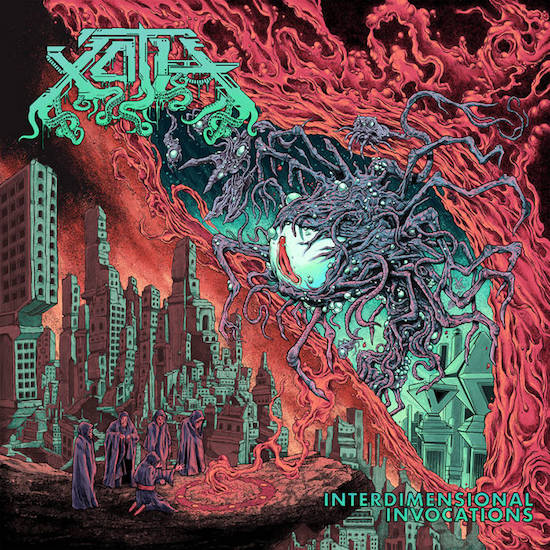 Themes referencing a futuristic dystopia, ancient mysteries and emerging catastrophes as is described for Interdimensional Invocations by Washington death metal band Xoth. Usually when I hear those words in any association with music, I’m automatically interested, therefore seeing them attached to an upcoming death metal release was thrilling enough to check out. Definitely not the first band to contextualize the subjects but given the success by most of what I have heard within the stratosphere of themes, I was more than willing to investigate Interdimensional Invocations. It comes as a surprise Xoth are an independent band, usually I would expect a record label to have played some role in the crafting of music this well produced but that is not to be as the makeup of Xoth handle primarily most aspects with the aid of 2 outsiders. The Seattle, Washington based quartet have created a wowing album, its technical, slightly progressive, spacy, flows well and is a lot of fun for its duration. Interdimensional Invocations is a cosmic cook-up of styles resulting in an appetizing galactic stew.

Each song is handed with a care that can only come from a determined sect of musicians. What you will hear on Interdimensional Invocations is the result of a strong fellowship among musicians. Tyler and Woody’s guitaring evince an intergalactic feeling as though in a spaceship frantically being chased around the orbit of a hostile planet by its natives, while Ben and Jeremy provide the thump and pulse respectively to aid in the invocations. ‘Casting the Sigil’ wastes no time in introducing the listener to what Xoth represent musically; aggressive, complex at times, slightly groovy, and rhythmic others; consider a bond of thrash metal, death metal and black metal with technical and progressive elements intertwined. Take ‘Back to the Jungle’ and ‘Unseen Abductor' for example, both ringing loudly with each aforementioned element, to the point where you feel like you’re listening to some strange but addictingly delectable merging of Origin, Vektor, Rings of Saturn and Obscura like a collection of planetary matter or molecules bouncing around a lava lamp.

Having 3 members contribute vocals on Interdimensional Invocations, adds a refreshing feel that is often present on each new song. But amidst all the musical highlights is lyrical content that portrays and signals the nearing collapse of this ‘civilization’ humanity has prided itself in; ‘Back to the Jungle’ speaks of this fall that would usher in a rebirth of the primitive age among the contaminated fields of technological waste; a species subject to feel the strike of its own murderous hands with reasoning erased and survival instincts activated; “dog eat dog” could not be more applicable. The music on Interdimensional Invocations appears to be structured around this theme as other songs exalt the idea (soon to be reality) of humanity’s downfall with references to what you would expect in such a perilous age. ‘Cast the Sigil’ appears to talk of the blind dependency on shit humans have subjected themselves to despite the many warnings. The species so easily manipulated is puppeteered into a void of hostility beyond its imagination, a nightmare the organism can make only worse through its will to survive; evolution and de-evolution working in conjunction within this space of chaos; natural selection at its most visceral.

‘Melted Face of the Soul’, ‘The Ghost Hand of God’ ‘Haruspex’ and ‘Plague Revival 20XX’ offer the best musicianship on Interdimensional Invocations, landscapes of beauty and ugliness are sketched and stitched together in depicting contrast on the record. Fragments of technical tapestry intermingle with progressive patterns figurative of an intimacy occurring between fragility and parturition. The thought of how so very connected the opposites are within this universe incessantly orbits the consciousness, stability and growth depend on the contributions yet even within a self-destructive species those conditions exist. That is the overall image Interdimensional Invocations generates, through proficiently played, detailed music and insightful lyrical content, Xoth further dissects and examines the events pointing towards the emergence of a new epoch in mankind’s existence. Interdimensional Invocations is an outstanding record preaching the pitfall of humanity 2020 and beyond.