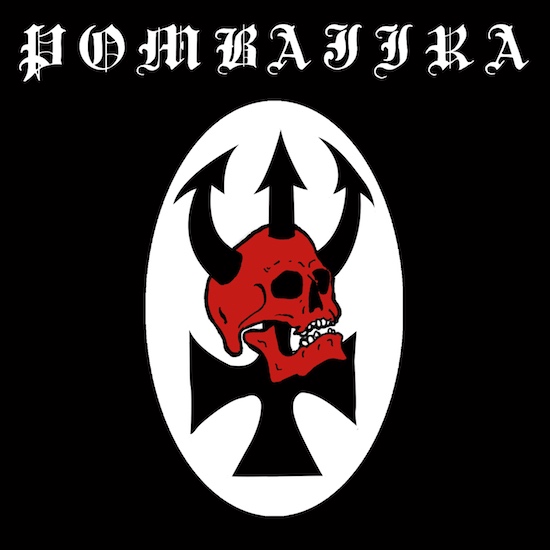 Doom metal coming from Brazil is not something I get to interact with often given its scene has been thrash and speed metal dominated for many years up to now, so when Pombajira's self-titled debut showed up, turning away from it was out of the question. If you were looking for some kind of ugly produced, raw and instrumentally candid doom metal with one foot outside of its circle playing tag with horror punk, Venom and Celtic Frost while predominantly doom metal, then you have stumbled upon the ideal release. I’ll admit the artwork did help in garnering my interest, but it was also that mystique attached to Brazilian culture that pushed it. Brazil is known to have rich customs and beliefs that often times come to be represented through all forms of their music; on Pombajira there is no exception. The name itself even without knowledge seems to reference something of occult folklore which is true; 'Pombajira' is indeed an Afro-Brazilian deity associated with female desire, beauty and sexuality among other things.

By attaching such a name to the band, it should come as no surprise occult imagery and themes would be ensued. Environment and upbringing usually come to influence the music most musicians make; hence the expectation is fulfilled. The trident lineup of T. Splatter (drums), Blizzard (guitars, bass) and HellSon Röcha (vocals, guitars) have approached their full length with a steady footing in pace. Most of what you will hear on Pombajira is slow to mid-tempo with their fastest and one of the favorites being 'Queen of the Night' slightly breaking away from the formula. Casually opening with 'Gira' the band quickly conjures the atmosphere with this guitar dominated instrumental. Though fairly basic, it does the job in setting the tone for 'In Reverence' by use of a track shaped in mimicking a stoner doom posture minus the fuzziness. With most, if not all tracks referencing Pombajira the deity, I did find a toggle among different moods occurring as each song tried to reflect certain aspects of her existence, ranging from sexuality, to domination, to her malicious and vengeful nature.

'The Lost Exit of Darkness' is centered on doom metal taking the quicksand-esque approach to fuel an insidious atmosphere. In addition to carrying a bare bones production, Pombajira's musicianship is not over the top, the drumming is like I would expect it to be in having more to do with melody support and pace keeping, the guitars have soloing moments ('Vital Lucifer', 'Queen of the Night', 'Malandro e Mulambo') while the vocals are raspy and find comfort in Tom G. Warrior's early Celtic Frost range and pattern occasionally. It's the reason that old school organic black/doom/heavy metal feeling is so dominant here. As mentioned earlier, a horror punk rock/metal vibe emerges on 'Queen of the Night' that I wish had been used more on the album due to how well it grooves and sits well with the rest of the songs and themes, given that sniff at new air did prove to be refreshing.

Pombajira is carefully paced through its 29-minute run-time but is far from nimble and maintains a rewarding roughneck feeling aimed at the jugular. However, the potential to expand/explode into other territories is there but for a start Pombajira will serve as a satisfactory introduction to the band and glimpse into Afro-Brazilian culture.