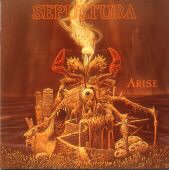 “Afterburner” is an album from ZZ Top. But this term also describes the relation between Beneath The Remains and Arise in an almost perfect manner, because the obvious intention behind Arise was to continue the success formula of its predecessor and Arise is also a great album, but the “wow”-effect of its older brother does not show up again.

Sepultura still stand with both feet firmly on the territory of thrash metal. No indigenous sounds, no endless percussion sessions and no excessive sense of mission dilute the pure metallic art. Of course, this does not mean that the output lacks diversity. But elements like the atmospheric guitar intro and intermezzo of 'Desperate Cry' do not intend to take away the album its thrashing character. However, pure, straight and merciless neckbreaker like the opening title track or 'Infected Voice' are rather a minority here. Nevertheless, the riffing of 'Arise' (the track) impressed Germany’s Exumer so much that they recycled it on their 2016 album “The Raging Tides”. Funnily enough, this riff also appears (in a very similar way) on their opening title track. Once again we learn that some riffs withstand the test of time with great ease.

Sepultura were already a lucrative brand after their third full-length. It comes therefore as no surprise that Arise scores with a sharp, precise and powerful production. The guitars saw restlessly, the angry voice is neither dominant nor sidelined and the band increases the intensity always at the right moment. Maybe Scott Burns and Andy Wallace saw the border to sterility during the recording sessions, but they never crossed it. Not only the atmospheric beginning of the partly mild but steadily intensifying 'Altered State' confirms this statement. Moreover, Burns and Wallace equipped the band with guitars that always convey a menacing undertone. For me, this is a very coherent and fitting mix.

The songs do not show off their progressive structures. Nevertheless, Sepultura have integrated some twists and turns. Especially the most opulent tracks ('Desperate Cry' and 'Alterer State') profit from this fact. But even the somewhat predictable songs do not fail. Arise is totally free from stinkers and its configuration (nine songs in less than 43 minutes) is pretty perfect for their music. Thus, it is only logical that all songs work. Sometimes a bit better, sometimes a bit weaker, but the overall impression is really good. Today my favourite songs are the opulent and sinister 'Desperate Cry' as well as the somewhat spooky 'Under Siege (Regnum Irae)', but in view of the homogeneous design of the material, it can change already during the next days. Maybe this indicates the quality of the here reviewed work in the best way. To sum up, I still see Arise as the afterburner of Beneath The Remains, but is it a very hot one – and it still makes fun, even after more than three decades since its first release.

Definite a solid album with a newer version containing bonus tracks. So in actuality, if you purchase it nowadays, it will feature those bonus songs. Not as good as Beneath the Remains, but still quality thrash from the legends themselves. Very good riff structures and intensity in playing. Max belting out some good, aggressive, and intense vocals alongside the rhythms that just plain kick ass. Technical, fast as all hell, with tempos varying, gallops exhibited, solos that are crazy by Andreas and the bass + drums fit in perfectly with this awesome release. So much energy and I wonder why their newer material they changed genres after Max left.

Yes, you'll hear some great lyrics spewed out on this one, a true thrash metal conquered release. I'd have to say that it's difficult to compare this one from older recordings, but definitely much better than Morbid Visions, even though they started off as a death metal band in the early days. There's many reasons for that, but let's talk about Arise. A lot of changing up in aggression, some songs are fast as hell such as track 1, but overall the changes are dramatic and wholly aggressive as all hell. Great guitar work here, some like this album the most, but really, in all originality sense Beneath the Remains is more original, Arise it seems as though I've heard some riffs very similar before, however, in overall estimation and criticism, I would say that Arise is definitely a Sepultura album not to leave out in your collection. Holy way better than Chaos AD, a newer one by the band when Max was still around. But I think the band started off with dedication to their thrash metal genre, but diminished over the years. Kind of like some bands just changing genres to sell more records. If you want original thrash album that is filled with utmost intensity, aggression, technicality, originality, and utmost speed, Arise hits home for you. I would say that Max and Andreas really put in a lot of time to make this album work so that Sepultura still can say that they have some albums that are definitely original and kick ass thrash metal. Andreas improved, his leads are less so on this one, but they still show his aggression and intensity along with technicality. There's some acoustic licks meshed in here as well.

Definitely don't leave this out of your thrash metal collection. I'd say that the production quality is superb, and all instruments were mixed well and nothing was left out. A dramatic and amazing concoction of songs and music that just damper your eardrums to the core. I think the band hit it's peak here, then went on that gradual decline like I said. So in effect, Arise would be the best overall thrash metal album that measures up to Sepultura's longing talent, a talent that dissipated over the years, and to me and other fans of the band, are to hold in a precious memory. So as far as what I think here, Arise hits home in all aspects. Get it now, you won't regret it!

Brutal! One word to describe this legendary disc. Sepultura took what they had with Beneath The Remains, polished it off a little bit, added some insane sound effects, and gave it more intensity! There is nothing I can see that is wrong with this cd. The spread of this disc by word of mouth was enough to get it onto U.S billboard charts top 200 which for a thrash band, during this time, was a huge feat! Each song has its share of memorable riffs and guitar solos. Igor's drummer is even more earth shattering this time around with plenty double pedal action to strike a chord with any die-hard metal fan. His skills displayed on this album blow all the other releases away! Max's vocals are also better and the guitars sound nicer and more tight than on their previous release. So again there is nothing bad about this disc. Ready for some top of line thrash! Sepultura deliver the goods and shine brighter than ever with this album!

Bottom Line: Like I said with Beneath The Remains any fan of metal should make this a part of their collection. It remains this band's greatest album!