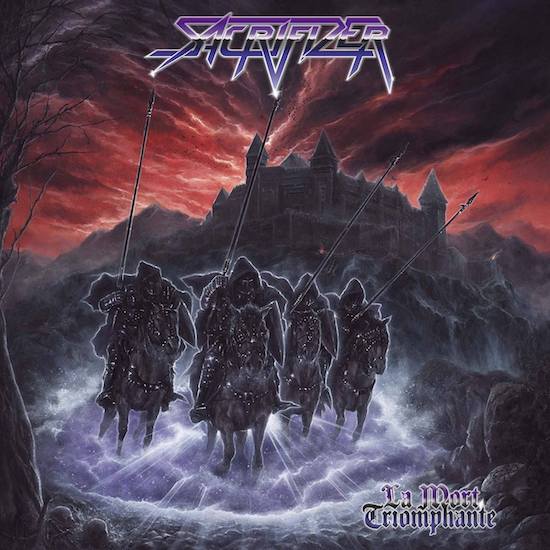 Despite its somewhat silly company name, Dying Victims Production mostly release good stuff. Okay, they are not totally immune against run-of-the-mill metal and recently they gave a platform to German singing amateurs, but mostly they prove their good taste. Thus, it comes as no surprise that Sacrifizer from Eiffel tower country do not only impress with the eldritch artwork. The horses of the four horsemen are galloping again and Sacrifizer’s sound almost brings back the days when a band called Metallica already sang about this diabolic cavalry. This is traditional speed metal with a proper quantum of thrash and some power metal elements. A strange experience; the songs sound musty (the production) and fresh (the compositions) at the same time. Yet I have to be more precisely in terms of the production, because La Mort Triomphante is, in the format of Dying Victims, a patchwork album with the six original tracks, three demo pieces and a brand-new number. On the one hand, this is somehow annoying, because it results in a pretty heterogeneous full-length. On the other hand, we can perfectly retrace the development of the band.

Starting chronologically, I put the focus on the demo songs. They mark the most furious part of the patchwork. The dull sound makes one thing clear: here comes the underground. I enjoy the experience to see that Sacrifizer's fanatic velocity as well as the vocals (many Schmier screams, but also some Tom W. "ughs") inspire the elderly teachers of the old school to a spontaneous party in their venerable masonry. Yes, the differences between the three tracks (number 7 to 9 of the running order) are only manifested in nuances. But these songs were the band’s first signs of life and they show an appropriate degree of maturity. So, we get vicious, darkened and poisoned tracks to hear that storm forward restlessly. The best riff is probably featured by "Profane Forces", but, as mentioned before, I am speaking of nuances in this context. Congratulations to Dying Victims that they have wrested this material from the dusty shelves of the metal archives.

But the six pieces at the beginning of the album are great as well and not too far away from the demo. A shady guitar, seemingly played on a vessel, introduces the full-length (at first glance, I thought Martin Walkyier is back in order to spread the Christian faith, just think of Sabbat's "Advent of Insanity"). After this atmospheric beginning, "The Grave of Nosferatu" builds the bridge to the earlier recorded pieces. Okay, it shows more substance and a more meticulously designed pattern, but it mainly relies on its raging guitars and the accurate drums. Anyway, the shrill shrieks do not occur that much anymore, and the more professional sound illustrates that Sacrifizer do not need to fear sonic transparency. The songs of the original EP have a hectic touch and they reveal both technical skills and a certain naivety that characterized the early days of extreme metal. The coolest riff shows up at the beginning of "Massacrator", but all songs hammer the nail straight into the wall due to their slicing riffs. Even the slightly weaker and only mildly attacking title track has its moments.

Finally, the previously unknown stand-alone track has its own intro and all in all, it is well aligned with the remaining material. So, I have to admit that I rather see stagnation than an evolution, but that’s absolutely no problem as long as the quality can convince. And here this is definitely the case. Sacrifizer can become a force to be reckon with – it’s up to you (and me) to support them as long as they forge tunes of this class.