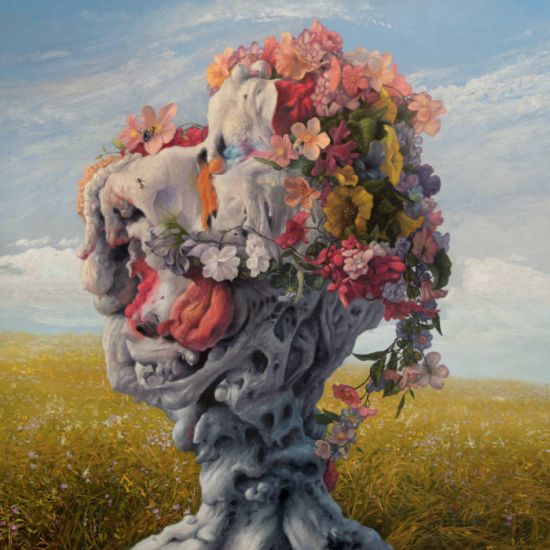 This may very well be the gayest thing I’ve heard all year. Everything, and I mean everything, is layered with levels of cheese and bombast I’d usually only expect in Italian power metal. I swear to shit, Veil of Imagination is written like a fucking Disney movie. The twinkly keyboards, the massive, multi-song prog dynamics, the film-score production, the blatantly sappy and theatrical melodies…don’t think the intermittent blastbeats and growls can pull the wool over my eyes here. Even those are as easy on the ears as they come, and much like modern Opeth, Wilderun seems to spend just as much, if not more time playing around with the lighter stuff. Listen to 'Far From Where Dreams Unfurl' and tell me you don’t picture yourself frolicking in a forest.

Amidst the flamboyance, Wilderun covers a lot of ground. The contrast between smooth, Opeth/modern Enslaved style extreme prog, slow, sensual ballads, and general Disney styled romping is pretty strong, but Wilderun ties it together through sheer conviction and shameless whimsicality. There’s so much cheese in the soft, delicate little piano and guitar moments sprinkled in almost every song, and even when the huge riffs crashing in feels predictable, the smooth guitar tone always keeps it pleasant. Normally I would discourage bands from trying to pull off so many different things in an album, doubly so when it’s symphonic or prog stuff, but Wilderun gets a pass because they…absolutely nailed all of it. The fact that this is the soundtrack to the Rainbow Sparkle Fairy musical most of the time is of absolutely zero detriment to this album because it sounds fucking fantastic. The clean vocals are the main hook keeping me going here, as it’s a delicious, theatrically trained tenor that gives me some mad Falconer vibes. That is something I have been yearning for more of in metal ever since I heard Falconer themselves (especially because I feel like they under-utilize Mathias Blad a lot but that’s a whole other discussion), and the range of motion displayed in Evan Berry’s singing is pretty great, and his natural tone is extremely addictive. Even if the album was written like shit, I’d still probably give this some time because of the incredible singing present on Veil of Imagination. This style works so well in this kind of metal and I don’t understand why we don’t see more of it.

Fortunately, this is definitely not written like shit - if anything, the attention to detail in the extra garnishes and transitions is thoroughly enthralling and well above most of their peers. The first three tracks are all over the place, throwing a lot and showcasing the various elements of the band’s sound, but it’s the latter half of the album where they get into longer grooves and come back to hooks more frequently where this really starts to pick up. The aforementioned 'Far From Where Dreams Unfurl' is my highlight, with the rampant gayness being irresistible and the main chorus having the ability to stay in my head for days. The first half of the album almost seems like a 30-minute build to that mother fucking hook, I swear. I’m only partially kidding - the way the songs create a narrative from beginning to end is outstanding. The guitar riffs are never the most complex or mind blowing, but they always create the proper atmosphere needed to drive the song, and the way the melodies seem to tell a story is a feat in itself. Songs well over ten minutes feel half as long, and even though the melodies have a ridiculous amount of sap and the vocal lines tend to repeat a few different motifs, I keep yearning for more. The folk metal influence bears its influence in the scales and jiggy verses, and while it teeters on the edge of being trite and poppy, it keeps a delicate balance and never crosses the line. If anything, the folky melodies keep things grounded and accessible.

I can’t say I like this kind of stuff often, or listen to it much at all really, but in spite of all that Veil of Imagination absolutely floored me and is one of those things that just kind of has to be heard to be believed. This is ridiculously pompous, melodramatic, bombastic, and most importantly gay as shit, and it WORKS. Wilderun’s previous stuff is cool enough in its own right, but on Veil on Imagination they double down on being complete fucking homos and they absolutely won the gamble. Dan Swano’s mixing adds an extra level of clarity of what would otherwise be a clusterfuck of an album, and the way all of the instruments complement one another is an accomplishment in itself. This is one of the few albums I feel comfortable using the word “masterpiece” to describe, as Veil of Imagination is a grand, epic narrative that is constructed with awe-worthy attention to detail and filled with melodies that get stuck in your head for days. This is easily my front-runner for album of the year right now.