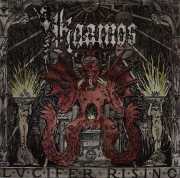 This is a crushing album that recalls earlier Entombed, Dismember and early albums of Death Metal. The band plays tightly performed music at a reasonably breakneck speed that catches your attention from the start. There is very little to fault with the musicianship on this album and it moves splendidly from track to track. What the album lacks in originality it more than makes up for in the punishing huge riffs to be found.

Rather than take a more modern approach that bands like Black Breath or Vomitory have at carrying on the legacy of the early Swedish scene, this album stays firmly rooted in the classic production styles of the genres. It’s a very bare bones work that doesn’t have any Punk or Thrash tendencies as those other two mentioned bands have shown. The production is solid enough, but the drums seem surprisingly hollow and put into the background compared to the remainder of the instrumentation. The title track is one of the stronger moments on the album and comes nearer to the middle to the release. Also, the relentless song 'Chthonic' is a highlight that is nearer towards the end of the album.

There is very little let up throughout the length of the release as it even gains a bit of momentum as it progresses. This album still lacks in the originality department which tends to bring the overall impression down a bit. For those that love the sounds of the classics of the Swedish Death Metal genre, "Lucifer Rising" is nearly a must have, however.