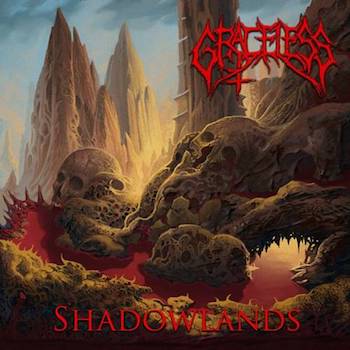 Re-releases are often a pain and only serve to make a quick buck. But for sleepyheads like me they can also be a blessing. Anyway, I was glad that the debut disc of Graceless, which I first became aware of thanks to Where Vultures Know Your Name, was reissued. Even with a bonus track, but that's just by the way. The real highlights can be found among the tracks of the regular album. But first a few words about the general style of the record. Yes, as if so often the case, a Bolt Thrower influence is unmistakable here as well. Nevertheless, the Dutchmen stick less closely to their idols than, for example, Just Before Dawn. The songs are often tough and thick, but there are definitely own characteristics. By this I mean less the production of the bonus song, which sounds much more American (and more modern) than the rest. Instead, I am speaking of some musical features. The pulsating opener (and title track) delivers one of them.

At first, I thought it is a typical mid-tempo banger with some melancholic chords that complement the brutal approach, but the instrumental part after the second verse told me I am wrong. Graceless create an outstanding, massive and increasingly intensive melody line that crowns this devastating attack. Doubtlessly, this song is one of the best they have ever written up to now and despite all the merits that Bolt Thrower deserve, I do not know a similar part on one of their works. Either they never delivered something of this kind, or I am just getting old and oblivious. Or both, it does not matter here. Of greater importance is that this song is not the only one that raises its musty head above those of the millions of comparable genre tunes. 'Iron Tears', surprisingly not a cover of Flotsam And Jetsam (stupid joke, I know), has a perfect flow, a very nice level of aggression and one of these fatal melodies that ennoble a death metal track without diluting it. A fantastic number, no more, no less.

The other tracks provide an officially certified portion of death metal. There are some morbid tones, for example at the beginning of 'Sumerian Flames', a lot of mega-heavy riffs, an adventurous double bass that wants to expose its big balls and, naturally, a lead vocalist who sees no sense in treating his throat with care. Of course, the band is not totally immune against typical, only moderately exciting parts from time to time. The deadly subgenre has strict guidelines, and they make it difficult to pull something completely new out of the hat. On the other hand, the four-piece has not recorded any throwaway track, and this is no matter of course for newcomers. Moreover, the dudes do not copy the great names of their local scene. Okay, it’s true - Asphyx, Thanatos and others shimmer through the songs of Graceless, but only because of the fact that all these combat units play more or less the same style and not due to specific characteristics. Given all these facts, I am sure that nine out of ten death metal supporters will enjoy this solidly and densely produced record of a really competent horde. And the tenth freak is just a poser who thought to be cool when calling himself a death metal fan. Boy, you’re not.