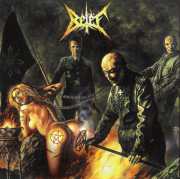 France has more than made its mark on the international Black Metal scene. Extreme kult bands such as Mutilation and Antaeus put France on the Extreme Metal map and continue to be influences on Black Metal worldwide. I bring this up as a context point because while Belef may someday join those unholy Gallic legions, Infection Purification is not going to be the album they do it with.

Starting a Black Metal band isn’t just about slapping on corpse paint and spikes and roaring about how royally cheesed off you are at Little Baby Jeebus. There’s a discipline to it that hides beneath the raw, primitive exterior. A big factor in this discipline is focus. If you’re not going to throw something completely new and original (a feat that is becoming a greater and greater challenge as Black Metal continues to evolve into divergent paths), then at least have your old school shit focused and directed. Throw your punches with surgical precision. Infection Purification gives glimpses that Belef is capable of this, however the sparseness in which they come together shows that they don’t understand it at this point. I don’t hear a band here, I hear five guys playing at the same time. They obviously know how to play their instruments, however the majority of the album consists of an unproductive dissonance that doesn’t give an indication of a unified attempt on the part of the band to play together. They’ve got the savagery and the passion, but it’s not directed for any amount of time that would create a genuine emotional response in the listener. A few more months making the rough edges harder and at least acknowledging as a band where the mutually agreed upon rough edges are would’ve made this a devastating album. Instead it just goes into the “Nice try, better luck next time,” bucket.

Overall, Belef stands to come out with a very devastating sound if they can get their group dynamics together. As it stands right now, Infection Purification leaves me feeling limp.