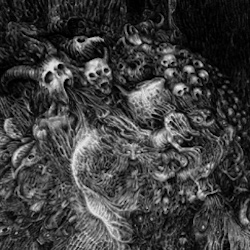 Too many fans and not enough bands – this is no problem which has black metal exclusively. However, a lack of attention from the target group does not only bring down weak bands. Flagellant from Sweden recorded a strong debut and their following releases probably reach a comparable quality level. Nevertheless, they called it a day in 2021. I regret this decision, especially when I am listening to really intensive and excitingly constructed tracks like “The Unseeing Eye”. It’s a pitch black monster that rolls over the listener, varying speed and moods, but always full of dedication, despair and willingness to perform to the pain threshold. The lead vocalist puts his entire personality in his contribution, the guitars celebrate dense lines and everything is put into the right light by the good production. It’s an almost perfect sound for this typical Swedish approach that spins melodious threads constantly while at the same time an infernal thunderstorm rages. Okay, one can say that Flagellant do not present an overly individual package, but honestly speaking, I enjoy the Swedish type of blackness very much and therefore I do not care about this lack of musical autonomy.

The three protagonists prove their keen intuition for proper song lengths. They are able to fill their six to seven minute configurations with adventurous ideas. Despite the uniformity of the material, there is no need to fear a tension drop. Maybe every now and then it seems as if the band did not realize the full potential of its own song ideas. Expressed differently, they do not combine their melodies and their aggression in the outstanding way that bands like Necrophobic pretend. On the other hand, their music has a more serious and less striking appearance than some Dark Funeral tracks. The musicians realise themselves and their vision of black metal without putting the audience's reaction first. Not the worst concept for true artists, I would say. Even better, the trio manages without frippery like female vocals, endless acoustic passages or horror movie samples. Instead, there is always the dominant seriousness. Flagellant thus undoubtedly does justice to the original spirit of black metal.

As regrettable as the bloodletting of good bands is, it is reassuring that new ones are always growing. This makes it easier to listen to albums like "Monuments" (a very fitting title) without a tear in your eye. Flagellant will not show up in a documentary about (Swedish) black metal, they did not give the genre their special individual aroma and they are probably no important inspiration for other, younger bands. But they share this destiny with many further formations. Moreover, they recorded at least one remarkable full-length, filled with powerful, mid-aggressive and authentic black metal, and this is reason enough to remember them from time to time.