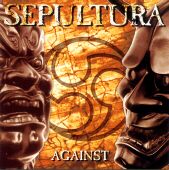 Against is the latest offering from jungle thrashers Sepultura and their first with new singer Derrick Green. After the departure of Max in 1997, many thought it was the end for Sepultura. But the boys decided they were not ready to pack it in just yet. Upon first hearing this cd I can honestly tell you I stopped it right after the first track and sat there for a minute to take it all in. It is definetly a pretty big stretch for all you die-hard Sepultura fans out there, but upon listening to Against the whole way through I began have a different outlook.

To start of fthe album, the group uses a fast and short hardcore type number with the title track Against. Common Bonds is the album's headbanger and my personal favorite, and Reza and Drowned Out are the album's flashbacks to their old thrash days. This time around the songs are even slower in pace for the most part, and those that are fast usually take on the characteristics of hardcore.

Basically, it is Sepultura exploring deeper and deeper with different sounds that could prove fatal for some of their long time supporters, but if you are like me then you will at least be able to find a couple good things about this cd. I, in fact, found many good things with this release and for what it is, it isn't all as bad as many are reporting. It is obvious that they are not playing up to their potential as a band, but this disc is still relatively good, and if you are still a real Sepultura fan, then this disc is sure to at least mildly entertain you.

Bottom Line: Either you will respect the band for wanting to experiment and remain a dedicated fan, or you will choose not to and deny them this right. Either way you decide to go, this is a good cd!