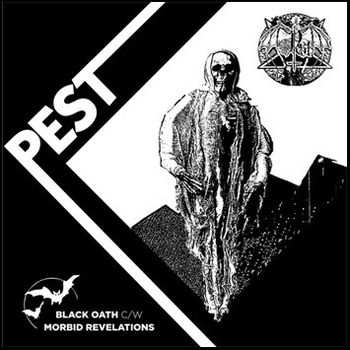 What on earth has happened to Pest? Is the band still ashamed of their last, lackluster album from 2013? That would be no mistake, but active repentance in the form of a new work, which would represent a return to the proven style and old strength, would be much better. Because that the band actually holds many, if not all trumps in the hand, they proved just before the low blow The Crowning Horror in the form of this 7". It presents two tracks and clocks in after eight minutes. No opulent release…

…but especially 'Black Oath' (pressed on the "Upper Side" of the record) leaves its mark. It's pretty minimalistic opening guitar creates an eerie mood in a matter of seconds and gloomy, almost psychopathic tones during the instrumental part reinforce this atmosphere effectively. The mid-tempo number tends in terms of style, but not in terms of quality to the feeble album from 2013. Everything works here. It’s not the most gruesome song the black metal movement has ever spawned, but it spreads the vibes of the genre.

On the vinyl's "Lower Side" appears 'Morbid Revelations'. It is recorded with an additional guitar player and attacks in a more hectic way. The nervous guitar lines are less catchy than those of 'Black Oath', but the song is also cleverly structured. The instrumentalists create many different parts, while the vocals convey a raw, slightly boozy note. Finally, the production shines with the tried and tested mix of filth, directness and vigour.

The release is well designed. The artwork fits the music, the lyrics are printed on the inner sleeve and holding black vinyl in my hands always feels good. People who like some dirty blackness with trace elements of traditional metal can go hunting for this gem. It's the last highlight of the group's discography up to now.