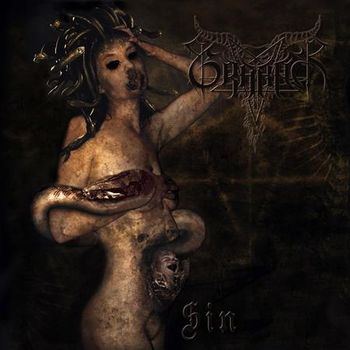 Type: Full-Length
Release Date: May 20th, 2011
Label: Twilight Vertrieb
Genre: Black
1 Prologue - The Covenant
2 Wrath - Into A Mental Inferno
3 Envy - Beyond The Grace Of God
4 Gluttony - The King's Jester
5 Sloth - The Echoes Of Babel
6 Lust - Of Masters And Servants
7 Greed - The Sign Of The Rope
8 Pride - The Black Mirror
9 Epilogue - The Lord Of Sin
MetalBite on YouTube

Machine gun drums, nagging vocals and sinister guitar lines - welcome to the always consistent universe of Grabak, a German black metal combat unit that never beats around the bush. Totally generic and slightly predictable, but enormously aggressive and violent, the band cements its status as non-fickle heralds of sonic tightness. Their best and most tyrannic songs have an infectious effect, at least to a certain extent. As soon as the fairly monotonous voice commands: "You are part of the legion", one really wants to become a soldier of Grabak's army. Too bad that this feeling only grows during the first half of the album where the better tracks are bundled. The longer the output lasts, the more the band runs out of puff. Little by little, the quality decreases, not in a dramatic manner, but recognizably and it goes without saying that a downward spiral is never a good thing.

Without delivering lukewarm or sloppy numbers - only the instrumental at the end of their fifth full-length shows a slightly lackluster face - and without shocking the listener with a feeble production, the album does not blow the audience away. It is true that the mix can be described as dense and robust. Moreover, it is aligned with the genre-typical standards with the effect that an uncanny mood is rising. Yet it is not the proverbial wall of sound. The same applies for the song material. The guys of Grabak have penned strong pieces, but in harmony with the slightly stale concept, there are no songs that stand out. The brilliance of true classics is missing. The band does not reach its best form, but this fact should not be overrated. Indeed, the Teutons have proven that they have enough ideas in order to write a perfect album (Encyclopedia Infernalis). But how many bands are able to produce such a masterpiece twice in a lifetime? Thus, it comes as no surprise that the status of immortal titans such as 'Bluttaufe' or 'Grand Grimoire' remain unaffected.

Despite the generally strong and ambitious guitar work, the integration of some cross-grained riffs would have been helpful. The overdose of more or less streamlined guitar leads is not the be-all and end-all, because due to these leads, the songs lack depth. Once again, I want to emphasize that I am not speaking of a mediocre or even ill-defined work. Nevertheless, I am a little bit disappointed in view of the lack of catchy (yet totally black) parts and the absence of dramatically growing song structures. Sporadic female vocals cannot cure these shortcomings and the same goes for the fact that Grabak do not lack of integrity and conviction. No doubt, the band acts fervently. Yet some explosive moments and a few numbers of flattening mid-tempo parts are not enough to form an album that deserves an outstanding rating. But regardless of all these details, it is a fact that the band shows a mature performance, and it cannot be condemned just because of not having fully exploited its extremely large potential. Consequently, I am still curious whether the black squadron will return or not after being passive since 2011.