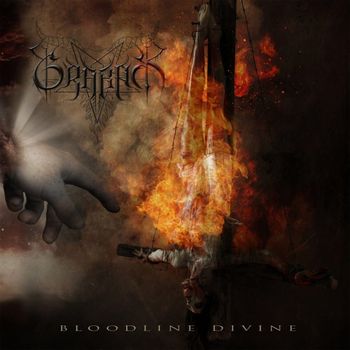 Something went wrong in the career of Grabak (if we want to use the big word “career” at all). Their perfect second album still waits for a comparatively good successor. The malignancy and intensity of Encyclopedia Infernalis have remained untouched – not to mention its majestic enormity. Bloodline Divine, the release from 2017, also has no chance to cast down the once-in-a-lifetime work from its throne. Nevertheless, the album embraces the listener violently and it cannot be blamed for a general lack of strength.

Grabak have not changed their song-writing formula. Bloodline Divine offers exactly the approach of Sin or Agash Daeva. And here we are at the point why the album is not on a par with the immaculate full-length from 2001. All these works have many hammering hyper-speed parts, they shine with an enormous degree of brutality and they deliver a fine soundtrack for the funeral of the overdosed techno maniac next door you loved to hate. Yet the great, monumental melodies are missing, and the atmosphere is black, but still not black enough (sorry for using the words of the old poser called B. Lawless). Grabak lay the foundation for a demonic cathedral, they create a very robust building and it weathers all storms. But where is the last iota of architectural brilliance? The melodic elements that show up during the less brute sections do not score with compositional excellence. Some of them remain pale and so they are not able to deliver an interesting contrast.

But perhaps I am just expecting too much when it comes to Grabak. Their 100%-album is both blessing and curse. The only band with two perfect long-players is Slayer – and these works seem to originate from another life (I was young, had long hairs and no back pain). So, let’s say it unmistakably: songs like “Corpsebridge”, “Seelensammler” or the title track breathe, spit, ooze and emanate black metal in its pure form and they do it in a competent manner. Honestly speaking, I could have mentioned the other pieces as well. However, sometimes the whole is more than the sum of its parts – and vice versa. Grabak cannot prevent a slightly stale feeling of uniformity. Even though each and every track hits the mark, the album does not reach the 90+X% area. I am not quite sure whether or not it’s a lack of compactness, a lack of diversity or a lack of catchiness (or all together), but one thing is certain: I cannot suppress the feeling they have a bigger potential than they show on Bloodline Divine.

What is left to say? The powerful production has an adequate depth, the vocals convey a proper quantum of diabolical vibes and any kind of lukewarm or soft tendencies does not show up. Grabak now have released six albums, five good one and a perfect one. Bloodline Divine belongs to the first group.