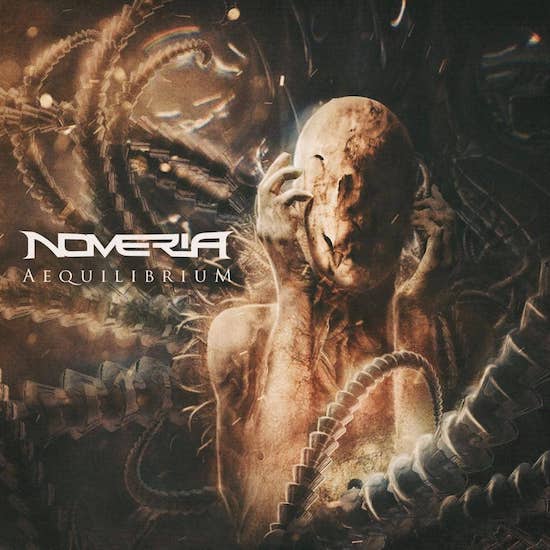 Noveria is a fairly new progressive power metal band from Italy, Aequilibrium, their third full-length, is set to be released through Scarlet Records, October 25th. Yes, more progressive power metal, this time it’s an hour plus long journey to the stars, so much so, one of the songs on Aequilibrium is even titled ‘A Long Journey’. Noveria’s approach to the genre is more modern than what I've been listening to lately, also heading more towards the futuristic. After listening to Aequilibrium, it is clear that the makeup of Noveria is clearly confident in their abilities to deliver a record that is not exhausting, but rather delightful for such an extensive experience. The teamwork of Andrea (bass), Omar (Drums), Francesco (guitars), Corigliano (vocals) and Julien (keyboards) have crafted a wrecking force of an album.

Aequilibrium has a clean production and bends towards the modern parts of the genre, never-the-less, through the keyboards, there is an old tinge of progressive metal to be heard. ‘Waves’ is a decent build-up towards the primary produce of the Italian quintet and given the clean production value of Aequilibrium each instrument and vocal note sung can be distinguished with crystalline clarity. It must be noted that vocalist Francesco Corigliano is an exceptional singer, his voice has quite an assorted range appearing un-strained throughout the album’s run-time. Moving onward to tracks like ‘Blind’, ‘The Nightmare’, ‘Broken’ and ‘Collide’, the qualities of Noveria begin to shine and fall into place with more ease as their modern sound is lightly conflated with the keyboards and expel a shoulder rubbing of old and new eras.

In lending some focus to the guitars and drums, Omar and Frencesco go head to head with the result reflecting an opulent combination of riffs and drumming. Julien’s keyboards lay the atmosphere over the exhibition put on by Omar and Frencesco while Andrea’s bass-lines land more support as Corigliano brings it all together. There is not a weak song on Aequilibrium, guess you could say their qualitative equilibrium functions at similar levels as ‘Waves’. Not forgetting, for in the company of fine musical artistry comes deeply expressive lyrics seeming to deal with inner thoughts and emotions. That is always a welcome feature of most metal I listen to; hence, at the end of the peregrination the listener/s feel rewarded, like they have witnessed the sacrifice each musician made during the creative process of the music. That in itself is difficult to achieve and is easily spotted particularly in heavy metal; many people within this art form can tell the difference between compassion and laziness. Some musicians go through events that proceed to shape their art, and more times than less, the effect/s of those experiences materialize through the music being created.

This is the kind of music I don’t mind spending an hour plus listening to, when there are musicians this talented, the process comes as a delight, something that is priceless considering the over-saturation metal has been dealing with post 1993. Music this good is hard to come-by if you’re still looking towards the mainstream as a source, you will find shite 9/10 times. Noveria is a band you need to hear if you like elaborate, skillfully crafted and meaningful work; though Aequilibrium is the band’s third full-length, one gets the feeling they have made countless albums as a group given how well the songs flow. That's been a strength of many above average progressive-power metal bands, ‘flow’ has always been an asset they emphasized greatly on and for a record lasting just over an hour it has come as no surprise to me Noveria has excelled at what most enthusiast would consider to be a prerequisite of the sub-genre.