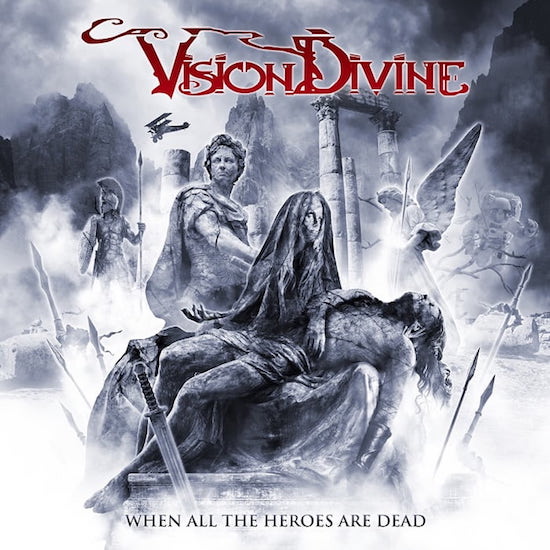 Power/progressive metal band Vision Divine from Italy are but one in a sea of many. Not implying they are to be overlooked, but they play the kind of prog-power metal I have heard many times over. Formed in 1997, they have been a part of the era I hold dear, so there was no skipping this. When All the Heroes are Dead is their comeback album since 2012's Destination Set to Nowhere (which was very successful), so it's been a considerable amount of time since their last output, hence the question of ‘do they still have it’ was a most likely one. I was not eager to put ear to this newest record, but I checked them out on The Metal Archives, and they appeared to be a solid bunch as the scores showed. Somewhat strange, I've been on a prog-metal search for a few weeks now and given the long break from the music, it’s good to revisit and see what the genre has become, so far it seems to be in good condition as I last remembered it to be. Thus said, this release is yet another that reminds me of the early 2000s scene, that 2003 and onward era that I fell for. Vision Divine's latest record When All the Heroes are Dead is a mega dosage of nostalgia bringing back memories of when I first heard Stream of Passion, Echoes of Eternity, Kamelot and Conception.

There's a certain magic about 2000s progressive metal that's hard to free myself from, and Vision Divine remind me of how deep under its spell I am. From the first instances of 'The 26th Machine', the choirs, the motivating sound of the vocals and those mountainous ‘larger than life’ moments, shot with the power and velocity associated with the genre. Even more special moment occurred when the keyboard solos kicked in, hence I had already sunken deep beneath the enchantment of Vision Divine. Heading down the order to tracks like ‘3 Men Walk on the Moon’, ‘Fall from Grace’ and ‘Were I God’, the dosage of nostalgia is turned up even more, now I really believe it is the early 2000s. Those tracks trace the very blueprint of power and progressive metal with even more precision. It was a done deal, I could not get over how good When All the Heroes are Dead turned out to be. All the fantasy-esque stereotypes came-alive, the sky was sunny and sparkling, the fields were green, dragons were everywhere, there was a princess that needed to be rescued from the evil king's dungeon and there was a knight on a mountain waiting to do just that; not really, but I think you understand what I’m saying.

However, in contrast to all the fantasy, Vision Divine’s lyrical content is much deeper and cryptic where references to religion and the reality of life dominate, hence, the emotion and passion supporting those topics are heard with ease. The movement between various moods is phenomenal. Musically you get great representations of the artwork through tight and again, enchanting playing by drummer Mike Terrana (drums), Andrea (bass), Federico (guitars), Alessio Lucatti (keyboards) and Olaf Thörsen (guitars). New vocalist, Ivan Gianni, vocally reminds me much of Roy Khan’s from Conception and Kamelot; or a blend of Roy Khan’s and Joacim Can’s (Hammerfall). His high and low pitches are sincere; thus, the feelings are conveyed convincingly; hear ‘While the Sun is Turning Back’ and you’ll understand; such a beautiful song, great riffs, tone, lots of emotional content, incredibly good vocals, absolutely enthralling music.

Vision Divine have such a cohesive blend of tempos and emotions it’s easy to see why they have and continue to be a dominant force in progressive metal; and with the addition of new singer Ivan Gianni, the band’s future seems to be intact. You need this record if you love progressive power metal, When All the Heroes are Dead is poetry in motion.