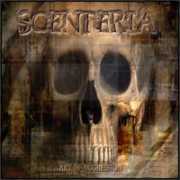 If years ago metal was all about experimenting and adding new sounds to the music, today things are just starting to go the opposite direction; it is all about going back to the roots, back to the beginning of extreme metal. And that is why no one will be able to stop the mighty return of thrash, which will soon gain its spiked and beer spilled throne once again.

Scenteria is a newcomer in the thrash scene. They play thrash with melodeath influences, where the goal of the music just follows one simple path: aggression. Doubtless that is why the band decided to name their debut album Art of Aggression.

Art of Aggression is full of traditional hyper fast thrash riffs mixed with some modern ones ala The Haunted, Impious and Hatesphere. The melodic death metal influence comes mainly, as with many bands, from the mighty At The Gates.

One thing that really got my attention is the drumming; it is extremely tight and heavy, especially in the drum-kick department, it’s nearly flawless. The production is aggressive, giving you the opportunity to hear what every player is doing. A bit muddy and raw, it gives a little extra to the overall sound.

Art of Aggression is a very decent thrash record that will keep you banging your head for hours. If these guys were able to release such a strong debut, I can’t wait to see what they have in store for their sophomore release. I think that Karmageddon Media had this in mind when signing Scenteria. They knew their debut album would be very good one, but they also invested in what these guys will unleash in the near future. If you don’t believe me, just give “Forever Lost,” “Addicted” and “Acts of Lunacy” a try. Blood will come out of the walls!