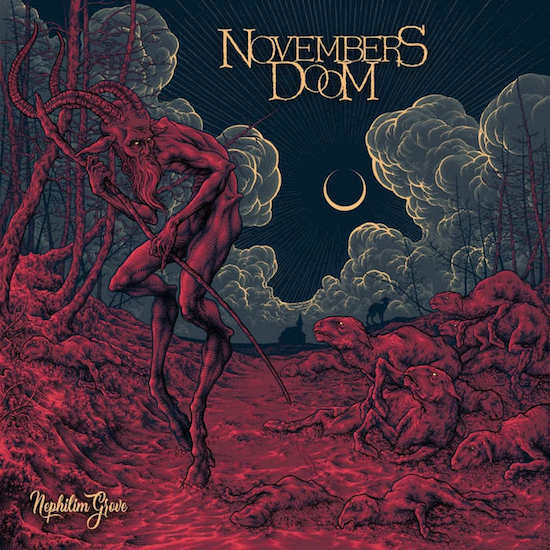 Novembers Doom by now need no introduction, their name is synonymous with death/doom metal and all that is. If 11 flawless full-length releases and being active since the early nineties isn't enough to warrant such a prestige then I don't know what is. Some few years back they put out Hamartia, a record filled with amazing clean and harsh vocals, pristine instrumentals and themes vivid through the bands strong musical guide. That was in 2017 but Hamartia still holds up well 2 years later to the point I don't think Novembers Doom even needed to put out a new record. Nevertheless; it's 2019 and the Plague Birds once again are invited with the dawn of Fall. Nephilim Grove sees the band follow an improved pattern of Hamartia through its story telling. You get all that has come to be expected from a band this legendary; atmospheres representative of the tales, somber and mellow moments, ominous tones and those grandeur/ larger than life postures encapsulated by Paul Kuhr's vocal dynamics while the all too familiar drumming of Garry Naples reemerges with that vibrant punch. What's not to love about Novembers Doom?, 30 years eclipsing a ¼ century of their shadow and still not a disappointing release, how much more dedicated can they be?

'Petrichor' leads the descent carried by the vocal of Paul Kuhr to contrast Larry Roberts who handles guitars on Nephilim Grove and with the completion of just one song Novembers Doom have already set a platform strong enough to sustain the following tracks. The base of their success is the seamless fluctuations they are able to install; the struggle occurring among despair, grandeur, agony and beatitude is what makes this record something to savor for ages. Their humble bluesy opening on Nephilim Grove patrols and casts a dim aura that the band tears down from time to time only to see a resurfacing of it through interstitial despondent sections. That barren feeling never recedes; rather it takes a commanding stance throughout Nephilim Grove; its shadow floats above the guitar soloing on 'What We Become', 'Adaigo' and 'Black Light' among others. I chose those 3 tracks on purpose due to the flow they contribute to the overall album. They sound like 3 different and most critical pieces of a puzzle that would remain incomplete without their input. While 'Black Light' takes the route of rebellion both lyrically and musically through its uplifting wave of thrashing, still that grain of defeatism can be heard amidst the loud rage.

One would begin to appreciate the way Novembers Doom approach on such a lengthy outing as it becomes a noticeable feature made conspicuous with progress that the band avoid dawdling when aiming to spread out the atmosphere. Some bands use long interludes that do nothing positive to help the musical fluency and outlook, while Novembers Doom avoids such dither by letting the contents of the songs speak. Hence the listener finds immersion easy to come by rather than having to sit through vacuous chore-like minutes. 'The Obelus' parts ways slightly with the overburdened sound of Novembers Doom through its up-tempoed approach; one might say it’s a bit lighter instrumentally, more on the progressive side and is a mood changer even after its groovy break; however, the feeling of despair somewhat knocks about and is made evident through the vocal duality. I think Nephilim Grove is a stronger album than 2017s effort; Hamartia opened with a kick but began to wander a bit just past the middle section; however, on here, the songs relay the torch to each other thus helping to stabilize and carry the material across the finish line with no entry falling behind. This is the ideal record a band as notorious as Novembers Doom would find fitting in celebrating 30 years of spreading their gospel of beauty and hopelessness.