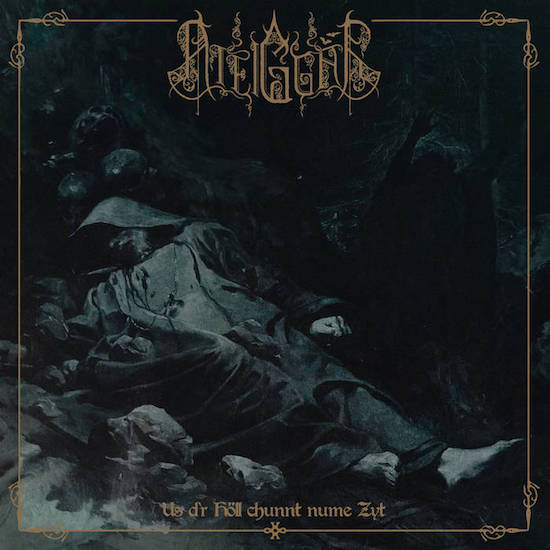 Switzerland’s “Helvetic Underground Committee” have been curating a fascinating and impressive crop of black and death metal bands, and their most recent band, formed by the members of Ungfell, no less is Ateiggär, and once again, the H.U.C., continue to deliver with yet another outstanding band.

As mentioned before, this band is a sister band/side project by the duo behind Ungfell, and instead of the folksy approach of that band, for Ateiggär, Fauth Temenkeel and Fauth Lantav have decided to make a throwback black metal mini album of pure second wave worship with their own flair and style. For starters, and most importantly, this band is a complete departure from the style found in the aforementioned Ungfell, both are distinct bands with a unique sound, the most telling sign is the vocal work of Fauth Temenkeel, he has switched his howling and wailing screeches from his other band for much more menacing and chilling growls that pay tribute to pioneers of the genre, his vocal work is a perfect departure and its foreboding intensity suits their new style perfectly, and as a seasoning to mix things up, there’s also added choirs and Temenkeel also adds shouts and howls to deathly effect in the songs.

Furthermore, the musicianship displayed is also very impressive. The guitar and drum work are the main highlights next to the vocals, Lantav and Temenkeel perfectly complement each other, the drums have the expected blast beats and double base melodies but at the same time, Lantav adds that little more spice and flair to the rhythm section by incorporating different drum patterns, some ominous and weirdly orchestral percussion for key moments and a seamless finesse that’s usually minimized on “trve kvlt” black metal, but make no mistake, Fauth Lantav has raw speed and aggression to spare, truly honoring the masters of black metal and he effortlessly switches between technical prowess and raw aggression. The guitar work displayed, again is a fitting tribute to the second wave, tremolo picking, shredding speed and wailing riffs but what makes it interesting and adds that extra layer of flavor is the more melodious and atmospheric side which are punctuated by the keyboards, the keyboard truly complete the very specific sound Ateiggär sought out to do, and its reinforced by the lyrics which eschew the satanic and occult leanings of the genre for astrology, ancient alchemy and the works of Johannes Kepler, all of these themes and concepts combined are what sells this EP’s sound, a throwback black metal style with subtle symphonic traits that evoke the mysteries of the cosmos and the stars, in a weird way this could be a space black metal EP but without the need to add industrial or overly progressive elements.

The final aspect to note here, is that for an EP, the length is just one song short of being a full length, all the songs clock between six and seven minutes which make it a satisfying and worthwhile experience that isn’t rushed and it most definitely doesn’t drag, it’s the perfect length and it give the band enough time to flex and make an impression. The only negative is really a nitpick, the music here at times would sound eerily similar of early Emperor and Satyricon which isn’t in it of itself a bad thing, and the album isn’t completely derivative, far from it, the influence is just noticeable if you’re familiar with those bands and the band experiments with atmospherics and melody in a much more effective way that those bands did in their earlier days.

Overall, Ateiggär is nothing short of another triumph for both the H.U.C. and their label of choice Eisenwald and I’m beyond excited to see what these guys have in store next for this project. It keeps the fires of the black metal cult alive and it pushes the genre into new, and mysterious heights.

Ateiggär taunt an age aching back to the first time hearing Darkened Noturn Slaughterult's "Follow the Calls for Battle" but with an addition of keyboard synth broadening the landscape of their sorcery. Produced on such a professional scale that could mislead anyone familiar with the scene into thinking Us D'r Höll Chunnt Nume Zyt is a full-length record, the gloss is but one component aiding to present the talent within the entity; thus, before I could even summon the thought of murmuring run-of-the-mill, I had already been proven wrong. The glitter of the mysteries manifested on Us D'r Höll Chunnt Nume Zyt are glorified and made dangerous through Ateiggär's battle-speed drumming, controlled rhythmic fluctuations, strikingly barbaric black metal vocals, dream-like/lunar keyboard-synth and pianos in-turn also anchoring the smoothness of their debut. Distinctly 2nd wave black metal that comes with that familiar chill of the early to mid-90s era of the movement still rank in the womb of its nurturing. Us D'r Höll Chunnt Nume Zyt has a-lot happening within just 27 minutes that don't appear as distractions during the solidifying of Ateiggär's sound; good on their part for not writing a monotonous buzz of drowsiness, instead finding entertainment in playing with the space between bridges by mending auras immersive to the nostalgic listener/s. It's a property to behold on all tracks, however, not overdone nor does it override Ateiggär's fiery black metal framework.

This revivalist era of second wave black metal; (not that it had been lost to time but went deeper underground with the approach of the 21st century) has brought us Ringare, Vargrav, Desciples of the Void, Nachtig and many others well worth the time. Now making way from Swiss sands is Ateiggär, that not only play a real serenade to the apex of second wave black metal but attempt in making it interesting simultaneously. 'Und d Korybante tanzed in Sturm', 'Us d'r Höll chunnt nume Zyt', 'En Blinde namens Duracotus' and 'De Dämon us Levania' offer instant gratification through the fluent combination of different musical elements wielded by Fauth Temenkeel and Fauth Lantav. As said earlier the Darkened Nocturn Slaughtercult influences are to be heard throughout Us D'r Höll Chunnt Nume Zyt, particularly in the drumming department and at some points are reflected through the riffs. By taking notes from the German masters and applying it to their script, Ateiggär has managed to tune one of the more promising EPs of 2019. Turns out Fauth Temenkeel and Fauth Lantavare are associated with the Helvetic Unerground Committe which a testimony regarding the quality is put forth by the combined unit; nothing under the sky of such prestige is without coveting repute. As the band's name is translated 'initiator of ideas' ones does get the sense this young faction may be on a quest to reinvent the weaponry. Us D'r Höll Chunnt Nume Zyt shows us what they can do and their understanding of the genre thus raising anticipation of what lies ahead.