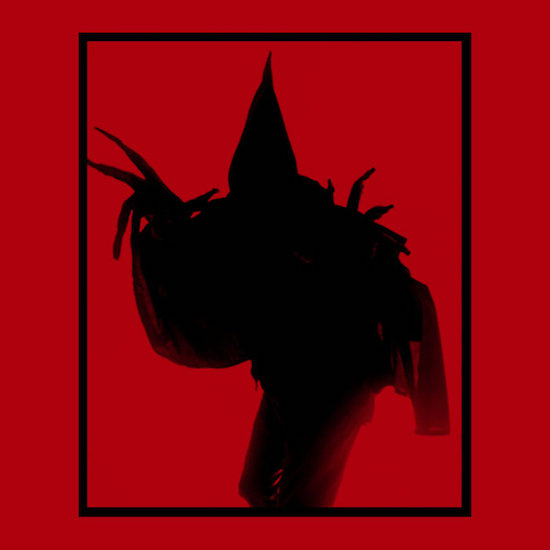 Dark delicacies have been emerging from the pits of Lunar Apparitions as of late; though a relatively small and obscure label, bands under their management bring an oak of forgotten simplicity, beauty, fright and quality altogether in honing black metal a way predating the ancients. Hence; the injustice of being encaged in an apartment complex or home somewhere in a friendly neighborhood doesn't help when setting out to explore a record of this caliber. Crafted to be experienced out in the immense palms of nature, one cannot help but feel robbed by the comforts of today’s newfangled existence when laying under the sigil of Canada’s Flešš, with this bite, Frenzied Bloodlust Underneath a Black Moon being re-released through Lunar Apparitions. Here to maintain the burning wick of black luminescence and restore that which has been damaged by the hands of outsiders and shamefully some of whom have been sheltered by its cloak, this creature takes no shortcuts; the road ever long and challenging as it should be, even when amidst evolution.

In these woods a fire burns, démodé and mystique the redolence erupting from the cadence of crumbling branches, lit by an eldritch inhabitant of nowhere, bound and shackled to incessant nightmares and ineffable pleasures, yet the longing persists. With only actions left to define a tongue and frequencies inexplicable, Flešš roams the Canadian forests a beast extraneous to the now adventitious populace of the order. In no manner an attempt to pride itself in elitism, yet, Frenzied Bloodlust Underneath a Black Moon is structured as an intimate session of black metal majesty; very old, patient, wise, meticulous and calculative. Frozen atmospheres of detestation and torment are met with wailing eroticism, sonic architecture like an antediluvian, near-extinct lexicon of reticent dynasties, grazing the awareness with frequencies of sharp riffing, shuddering growls, and whispers ever vile. Atmospherically, a bliss to the escapist/s of modernity; to those spoilt by what has become a trivial scene, an unbearable earache; a consequence, though in afterthought, a blessing, the product of a medium mismanaged by many “trve” and “cvlt”.

A puzzling manifestation of only 2 rites, well above the shameful mockery of a raw black metal fantasy band; Flešš seals the blood-pact with those already initiated and committed to the someday realization of a dwelling free from the ungrateful genus by means of ‘Vampyric Drain through Hypnotic Force’. The iron scented life force of a ‘civilization’ seeps from punctures administered by the lurking specter, so miserable amidst hatred and physical lechery; its behavioral crux captured and nurtured through the crack of instruments, samples and tones made tenebrous by a blurred and shrieking production. A lo-fi quality acts in sweet synchronicity with Frenzied Bloodlust Underneath a Black Moon’ s sprawling and swift riff-work, thunderous commands abettoring the deplore, proving to be a tactile measure undertaken by Flešš to stand clear of the norm. It’s the uncontrollable thirst of a creature maddened and intensified buy the ignorance of a some-mere thousand- old species stretching many corners of a planet exponentially superior to a trivial organism. Heed the chant of revival Frenzied Bloodlust Underneath a Black Moon brings, stare into the chasm of nullity, become one with the thirst, reject the hand of satisfaction.