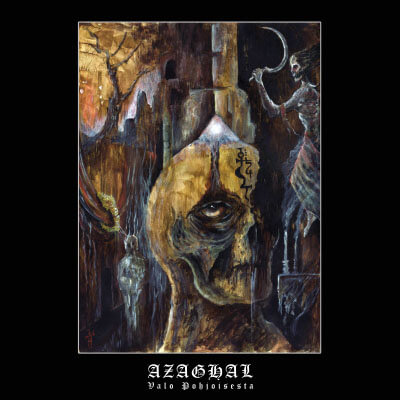 Dear fans of professorial avant-garde black metal, now it's your turn. Azaghal, the band that is well-known for its sensitive, almost fragile and nearly velvet interpretation of the sinister arts, has released another album and it is naturally filled to the brim with innovative, high sophisticated black metal for academics who like to study music as meticulously as possible. Enjoy the interwoven patterns that will make you happy and come to the conclusion that Azaghal is the most subtly working formation of the sub-genre.

No, of course not. Forgive me this infantile intro, but it's not easy to write something new about Azaghal when it comes to their full-length from 2018. As always, they pummel the listener until his or her corpse paint sticks completely at their fists. After being more than two decades in business, you can be sure that the experienced veterans know their trade and they are still full of misanthropy, grimness and brutality. Thus, there is no need to readjust the compass; Valo Pohjoisesta is a bitter-tasting and tradition-conscious work. Generally speaking, it prolongs the series of very convincing full-lengths of the Finnish institution.

For sure, it would be an exaggeration to say that each and every track comes close to perfection. Nevertheless, a profound darkness embraces the fiery core of the fierce compositions. Once again, the group provides evidence that its style lies in close proximity to that of Marduk's Morgan. I don't speak of the Panzer Division and I don't mean the mainly slowly creeping albums of the Swedish role models as well. But all these outputs in-between, "Serpent Sermon" for instance, are not far away from the murderous approach that Azaghal celebrate one more time. Their interplay between rapid, strict leads (the title track or "Ajaton") and crisp riffs ("AIWASS" or "Ylistys") works brilliantly. This band has no ambition to surprise the unwashed hordes of black metal maniacs with sonic adventures, it pursues a higher, more difficult target: delivering the old, almost rancid approach while always giving it a fresh aroma. "Siejulen Yössä" marks a good example in this context, because it shines with an oriental hinge, although it is totally dedicated to the glory of sulphurous bestiality. Okay, maybe it is true that they sound somewhat primitive and they do not generate this fascinating, almost magical mood that Behexen create in their best moments. However, the album is anything else but overly simply designed.

Azaghal present themselves in really good form without any signs of wear. Due to the countless further one-man-projects and bands from the land of the thousand lakes, it might be a challenge for them to defend their top position in terms of Finnish black metal, but they master it with dignity and determination. They do not deviate from the true path of the sub-genre, not an iota, but their sonic riot squads always remain unpredictable and homicidal. In addition, the violent and direct sound ensures that their energy does not fizzle out. Thus, the disc has an impact and cannot be blamed for being just another Azaghal album. Of course, main man Nargath has its own signature and it would be stupid to expect a change of his personal style. Yet it is exactly his individuality which has made the group to what it is: a reliable black metal brand, a robust fortress, a bulwark no one can conquer, because Nargath does not even show the tiniest signs of fickleness. And therefore, he and his army are still able to keep the majority of their competitors at distance. Does this approach sound slightly moldy? Yes, it does, but I guess this was exactly one of the reasons why black metal was invented. Listen to Valo Pohjoisesta and you will probably figure out the further reasons as well. But do not wait for velvet gimmicks.