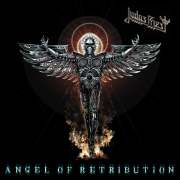 Absence of something great (or even just pretty good) often results in the build-up of a deifying view of whatever is missed over time. When it comes back, that deified view produces the highest expectations that when not met shatter the magic aura of this prodigal son. Judas Priest is not that underachieving prodigal son; from an encompassing view of Judas Priest's styles, Angel of Retribution may very well be the best album the British metal gods have delivered.

The sound on Angel of Retribution is so fitting; Priest gives us the cumulative effect of their entire career with sounds from each era bursting through... okay, maybe not so much of Rocka Rolla, or most of the seventies albums for that matter (which largely featured a toddler Priest still developing fine motor skills and personal identity), but there are still definite nods to this era in tracks such as the slower "Worth Fighting For."

Not only does the sound thread through their discography, but so do the lyrics with words such as "sad wings," "painkiller" and "stained class" all making appearances. Nostalgic hoopla or just plain cool? It's safe to say that the lyricism, instead of inspiring personal interpretation and meaning on a very cerebral or even spiritual level that is often demanded of intelligent metal fans today, is more apt to inspire visions of cheesed out and clichéd metal videos having Rob Halford standing on a rock, dressed in leather (of course) and singing intensely with his head bowed and a gloved fist curled toward his eyes. Not appealing to you? Then skip this disc. I, on the other hand, along with many old and new fans of Defending the Faith and Painkiller, am having fun.

That said, the opener "Judas Rising" and the voracious "Demonizer" have gone to the finals for the best Priest song tourney; thunderous, vicious and absolutely shredding, these are the highlights of the album and the juiciest bait for Painkiller diehards. Yet at the tail end, their doom epic "Lochness" is the least appealing of all, mostly because of the rather unimaginative lyrics that get stuck in your head like a popcorn shell under your tooth. Everything between varies in tempo and style bouncing from one era to another. These other tracks are not earth-shattering by any means, but the Judas Priest fan will embrace and likely grow to love most if not all of them. Flawed? Yes, but there's no getting around the bottom line here: for all fans of classic metal, Angel of Retribution is here to slay.