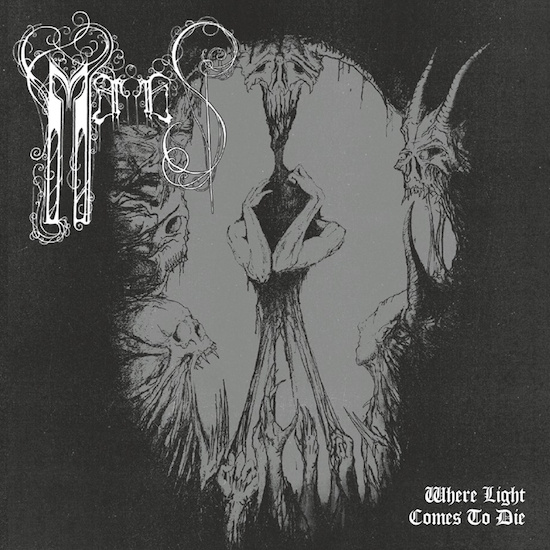 Finland is the country that never sleeps when it comes to black metal. Marras is another new band from this subgenre hot spot, but this is not to say that the musicians under this banner are newcomers as well. However, their debut should not be ignored. Of course, the flood of new releases never stops, neither in Finland nor on a global scale, and I cannot say that Where Light Comes to Die brings something completely new. Honestly speaking, some parts are anything else but innovative.

Firstly, the beginning of “Overture of a Lonely Journey” is, despite or even because of the harsh guitar tone, almost a copy of some meditative sounds a man called Varg Vikernes once created. Guess that the protagonists would have been well advised to select another title for their debut, because already its name makes me think of “Hvis lyset tar oss”. Secondly, “Transition of the Lightless Path” seems to take us to Blashyrkh, especially the first guitar tones, before it changes to heroic fanfares that because Rob Darken sleepless nights. One could give more examples, but I must also mention that all these “cross-references” do not have a negative impact on the overall impression. The material portrays different facets of the black genre, sometimes pretty soft, sometimes diabolically vehement, sometimes somewhere in-between. This is not that kind of thunderstorm from beginning to end that many other representatives of black metal prefer. Marras, this almost appears as an ironic twist of fate, try to go their own way, although they pick up some notes from the heyday of the Norwegian role models.

The album does not suffer from a lack of substance and it is not prone to repetitiveness. The band has a knack for the right configuration of the songs. They come to the point without presenting boring sequences and without being cut too soon. I am no big fan of movie samples, especially when it comes to the rather naturalistic black genre, but here they do no harm. The album is characterized by its different moods and the melancholic sequences are as interesting as the outbursts of aggression. Many instrumental sections, some of them with keyboards, show up and that’s not bad, because the overly distorted voice leaves a quite ambivalent reverberation. Nevertheless, Marras have enough quality to challenge their well-settled competitors in view of the sinister song material. The tracks are either atmospheric and baneful or dynamic and furious, but always intense. In addition, fillers have not been recorded and so the single songs form a strong unity. And it’s surely needless to say that the typical trademarks of the genre, for example some icy guitars, are not missing.

Time will tell whether or not Marras will be able to record not just a promising debut, but to leave broad tracks on the ice-cold ground of Finnish black metal. There is still some open space besides Horna, Azaghal or Behexen. Marras have the compositional competence to catch up with these names, but they will need a big portion of stamina and less prologues – four or actually six out of ten tracks are just interludes. I admit that almost all of them add value to the album which scores with a cruel yet voluminous, but first and foremost the four “complete” songs whet the appetite for more. Only the Immortal-Graveland-bastard “Transition of the Lightless Path” is on a par with these tracks. However, I recommend giving this album a fair chance. Already the Finnish origin alone is a seal of quality, isn’t it?