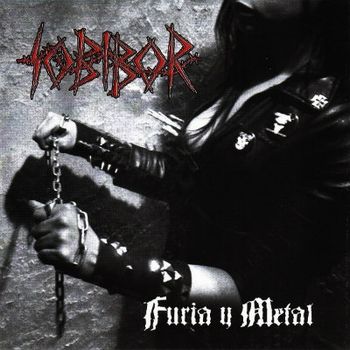 Sobibor - what a stupid name for a Colombian band. Sex sells, but provocation does not. The second thing I realize is the dull sound. In particular the powerless drums fall by the wayside. The hardly audible bass drum is only a vague deep tone in the distance. Okay, call your intro "Blitzkrieg", but if you do so, then introduce yourself with a belligerent, combative piece. This does not happen here. The three guys of Sobibor need a warm-up period, before they accelerate speed. As soon as the band has achieved its operating temperature, things go more or less well. "Carne" is a decent thrasher of the rather primitive kind, but already the third track suffers from an overlong intro again. It does not generate tension, it just happens and given this lame approach, it comes as no surprise that almost the entire track lacks aggression. I admit that the simple riffing is effective, anyway, I do not expect many slow-moving sequences on an album that promises fury and metal.

Sobibor are caught between a rock and a hard place. They do not possess this exuberant, sometimes chaotic energy that characterize some thrash formations from South America, but they also do not impress the listener with their maturity. No need to panic, Furia y Metal is no uninspired album and I do not regret that I bought it some years ago. It has a cool artwork and from time to time, the band is able to create a certain depth. The dragging "Danzando con la muerte", for example, is a really strong number. It has a malignant core and turns out to be a slow-acting poison. By contrast, some of the swifter tracks only touch the surface and this is not enough to make my pulse run faster. Mediocrity, I hate to write it, is the most significant feature of the album. The vocals, to give but one example, are neither original nor expressive. Some Schmier-like screams disturb the one-tone-approach every now and then, but I really hoped the lead vocalist would perform his Spanish lyrics with more charisma.

However, I do not want to condemn all of their fast songs. The straightforward and untamed title track stands out. Although it is well hidden on the eighth position, it marks the only song that takes the listener by the throat in a matter of seconds. It scores with this raw form of catchiness that greater bands like Sobibor are able to manage permanently. This song remains the only real gem on an album that is occasionally prone to some rather boring parts. The bad production does not make things better. Even though I like their enthusiasm that makes them run a band, I cannot say that the dudes of Sobibor have recorded a really relevant album. It lacks compactness, 45 minutes are simply too long for their level of creativity, and it suffers from the absence of memorable, gripping moments, but also from the absence of typical, rasping or jagged thrash riffs. No bad full-length, but also not good enough to be heard.