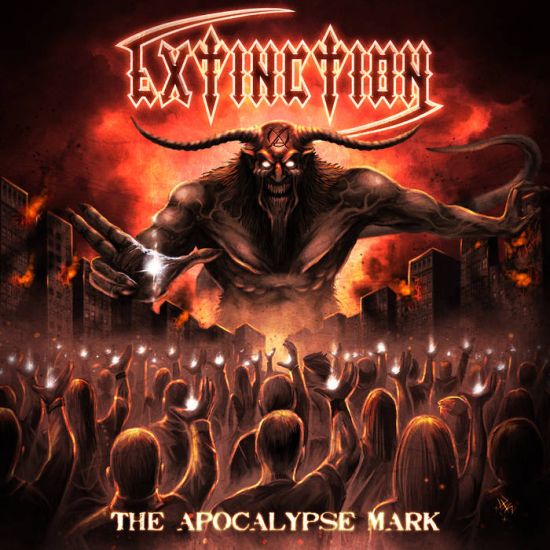 Seriously and sadly overlooked most of the time, Italy produces some serious metal music from all genres and sub-genres alike. From the doomy / traditional efforts of Death SS, into the Venom-esque speed and degradation of Bulldozer, Schizo or Necrodeath, straight into the power metal elite of Luca Turilli, Italy has its wondrously colored flag deep in the roots of this musical medium. Adding to that coveted mix is the relatively “new” Exctinction, providing its own brand of death-thrash for the not-so-easily-enlightened among us. The band has been around since the mid-90's, producing a lone demo some 24-years ago, but with two albums under the studded belt in the last three years, I'd say the gears got kicked in rather nicely.

In what has to be one of the better intros to an album that I've heard in some years, Extinction cascades rather seamlessly into the large air of the room. The band's brand of heavy metal work manages to create a thick aura of tempestuousness around the music, something all too often reduced to shambles by the chorus riff of haphazard bridge. Such is not the case with the group's second offering, The Apocalypse Mark. The intro sets the tone for the first musical track on the album, titled “Subcutaneous Parasite” and “The Apocalypse Mark” respectively. While I certainly hear some death metal elements within the tracks, the overall style is one of heavier thrash in a slower, more melodic vein, but it's really an interesting recording overall. The thickness of the tone throughout is one that seems to gently suffocate rather than subjugate, which is always a good element to build upon with music of this particular mesh.

Guitar-driven and unusually stylistic by design, Extinction takes an otherwise stagnant area of metal music and caves in the cranium with its vicious, stultifying blanket of sound. Rather than relying on speed for its own sake or over-produced material disguised by bland hypnosis, The Apocalypse Mark delves deep into the murk of the saturated gene pool and offers not only interesting riffs but wonderfully vital time-changes in just the right areas of songs. This is where the more experienced thrash elements come effortlessly the surface. “No Crimes in Paradise” and “El diablo del norte” are prime candidates for the best songs on the album for me due to the total shameless reliance on style and memorable riffs over blind, pointless speed.

I also really enjoy the vocals; while nothing special or new, the throaty tone is clear and concise, with just a hint of wonderment as to which classification need be attached to this band (because we all know metal bands so need to be lumped into a sub-genre so minions can sleep well at night). That little rant aside, I do notice a certain element of guarded restraint in the vocal delivery; that is, the voice seems to flow nice and evenly over the music without benefit of added force or studio trickery, an all-too lost effort these days. Suffice it to say, the band fires on all open plugs throughout the album, and it's one I plan to visit again more than a few times in the next few days.

I can recommend Extinction to anyone out there not expecting a reboot or revamp of anything, but that can appreciate and embrace the rare band that comes along and creates a collective that impresses the weary traveler among us. Hit the band up on whatever social media platforms they provide and listen to some pretty fun tunes – always support the artists!