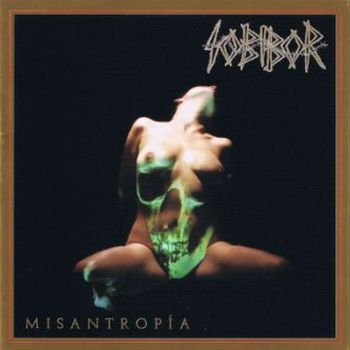 In a time of information overkill and constantly new impulses, it needs courage to open an album with an instrumental with a playtime of more than six minutes. But Sobibor does not consist of cowards and so they kick off their second full-length exactly this way. Honestly speaking, it is not the most adventurous instrumental in the history of metal, but a solid musical start. In addition, it showcases a welcome improvement. Unlike the debut, Misantropia benefits from a professional sound. The guitars combine sharpness and heaviness on an equal footing and the drums have more penetrating power than they had on the debut. The boozy, raw voice shows up after the opener and it adds some punk vibes. It’s still a somewhat limited performance, but with more expressiveness than before. This means that many details point in the right direction.

The songs are always comprehensible. The primitive character of pristine punk shimmers through some compositions. Nobody needs to fear an album which is filled to the brim with breaks and tempo changes. On the other hand, the songs have almost opulent designs and this fact and also some good solos smudge the punk impression. “Vencer o Morir”, for example, has nothing in common with an unwashed left-wing eruption. Its menacing atmosphere and the cruel vocals create a typical metal song. The mid-paced intermezzo after the slow-moving rhythms at the beginning comes pretty abruptly, but this is nevertheless a strong piece, among other things due to the lamenting solo guitar in the last third of the song. Ironically, the band accelerates speed again with the next piece called “Requiem”. With regard to its name, I actually expected a sad, lamenting funeral march or something like that, but the song is much livelier than its name. The guitars steer the song directly into a speed metal hell and I cannot say that they riffs leave me cold. (And that’s great, because I guess it is not my own requiem as long as my skin feels relatively warm.)

The more the album progresses, the more obvious it gets: Misantropia has more energy, more rough charm and significantly more compositional class than the debut. It marks a big step forward for a formation that was summoned to regain ground after its first shot. Unfortunately, I cannot really speak about the content of the lyrics, although I am learning Spanish for five months. (Horrible Indefinido. Fui, fuiste, fue…I’m getting crazy about it.) However, the song titles indicate more or less typical topics. Sobibor have chosen their band name in order to denounce human misery and their lyrics seem to point into the same direction. There is still room for improvement, but that’s nothing but a matter of course and can be said about 99,9% of all albums (and all reviews…). What really counts is that the vast majority of the tracks is driven by vivid guitars and appropriately fast drums. (Only the Motörhead cover appears slightly dubious - some things and songs better remain untouched.) Be that as it may, there is still this natural and roughshod, typically South American element, but the album also reaches a proper degree of maturity. In my humble opinion, thrash metal is the urban counterpart of the nature-loving black metal movement and here we are definitely listening to “sonidos de la calle” – and it just feels good.