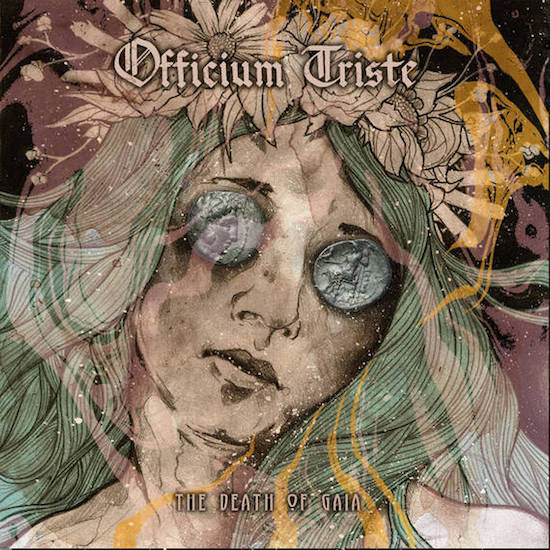 Type: Full-Length
Release Date: December 13th, 2019
Label: Transcending Obscurity Records
Genre: Death, Doom
1 The End Is Nigh
2 World In Flames
3 Shackles
4 A House In A Field In The Eye Of The Storm
5 The Guilt
6 Just Smoke And Mirrors
7 Like A Flower In The Desert
8 Losing Ground
MetalBite on YouTube

Slow melancholic, sorrowful tunes are the tunes of the season for those that could care less about holiday cheer. Officium Triste fetches the punishing weight of burdensome thoughts and regret with their sixth full length record titled The Death of Gaia. I can say this is certainly one of the finest melodic death/doom metal pieces if not, (the finest) to come out in 2019 and what a tear-some way the Dutch folks close the year; a weeping funereal ceremony for the sad destruction of earth. Drenched in the despondent streams of a Paradise Lost and My Dying Bride, The Death of Gaia is a nosedive to deep lamentation.

It's not often I could relax to music that has such a downcast atmosphere, but when it's done this well, resistance becomes a problem. The downfall is put-in motion with 'The End is Nigh' finding comfort during the descent through the use of cello and violins to arouse the beauty of Officium Triste's melodic landscapes. There is much of that on The Death of Gaia, so don't expect mindless repetition at any time. Just as strong are the guitars that create soothing melodies contrast to the constant dejected feel of the keyboards, violins, acoustic guitars and cello. This opens the opportunity for optimism amidst the overwhelming pessimism trying to choke out all hope; as you would come to notice the various methods used in an attempt to combat the despondency at times. Somewhat like the artwork, which evokes a sense of grief, challenged by the fading shades of different colors, the music on The Death of Gaia goes through a process it seems of dominant gloom pestered-off sometimes by warm guitar melodies and other effects I will emphasize on later.

Officium Triste also make certain to represent the sensational artwork portraying the 4 seasons it appears. Through the many tones and fluctuating momentum, that sense of seasonal transition is awoken to great effect. Some progressive metal elements take shape on the interlude-esque 'A House in a Field in the Eye of the Storm' building a path of sorts showing where the music may be heading. That trajectory manifests to some degree on ’The Guilt' by means of the clean, harmonious tongue of Mariska van der Krul contested by Pim Blankenstein's doleful growls, again reinforcing the importance of contrast in this kind of music, keeping it clear of monotony. 'Just Smoke and Mirrors' is Just Beautiful, from its spoken passages of crestfallen and motivational poetry, to its ascending rhythmic course uplifting even through saddening tones, this track is the brightest gleam of hope you'll get on The Death of Gaia, and goes as far as earning the best Gothic death/doom song I have heard for 2019; a more than convincing take on the sub-genre I think most listeners would enjoy.

Once being relayed the baton, the sound expands into a progressive flash-by, maneuvering its way to 'Like a Flower in the Desert' further making use of the progressive inclusions, this time raising the pace to suit a Gothic rock/metal attire interrupted by the incisions of doom. The Death of Gaia has to be the strongest recording in the sub-genre of melodic death/doom metal, I don't think there's anything out there surpassing workmanship this enticing and brilliantly pieced-together. Topping an offering so diligent and delicate would mean a new My Dying Bride record. The Death of Gaia being Officium Triste's sixth full length album is a hummingbird circling the ears, dispersing sweet melodies of dejection and hope. If you love this kind of tunes you need to own a physical copy of The Death of Gaia.