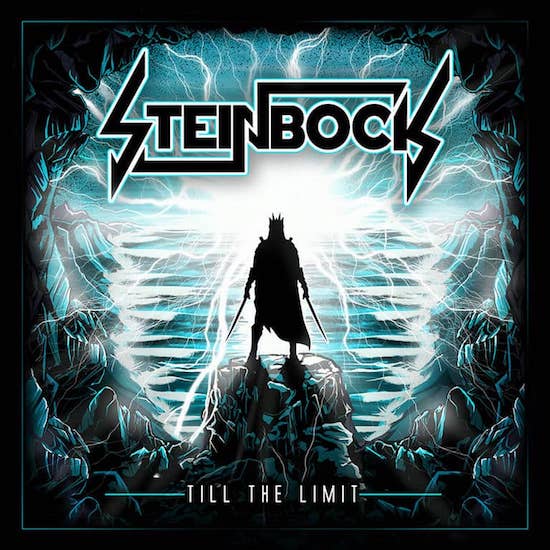 The German translation of "Capricorn" is "Steinbock" and I do not really know why a Spanish band decided to use this as its name. Well, let's don't give a shit about this, we are just losing time. It is somehow a casual name, but what about the music? Well, it also does not lack nonchalance, yet I am undecided. Sometimes I think I am listening to truly sharp riffs, sometimes I complain that they do not accelerate speed. Steinbock perform an interesting mix of thrash-inspired riffs and traditional metal. They do not try to please the mainstream, even though they keep an eye on vigorous melodies. Instead, they show their weakness for rough edges and "male" sounds, if you know what I mean. This is not the album one likes to be the soundtrack for a rendezvous, but probably it can entertain you during a long car ride at night.

Let's concentrate on the minor flaws of the album. The long-drawn "o-ho-ho" choirs in "4 Vices" could originate from the standing room of an amateur club and the chorus of "Jump!" also suffers from the somehow nervous background choir. In addition, the semi-ballad "Keep it On" wants to be a new "Nothing Else Matters". That's not per se a bad thing but lead vocalist Camilo should not intend to sound like James Hetfield. Camilo has a pretty expressive voice and it is not necessary to head for a slavish imitation. Fortunately, even the semi-ballad is rather rocking than kitschy and therefore it does not hurt the joy of listening significantly. Nevertheless, the more stalwart tracks have a better reputation in my individual metal cosmos. The quality of the riffs is high, the rasping guitars form coherent songs and variety does not come off badly. There can be no doubt that the advantages outweigh the disadvantages on this album. I would even go a step further. The relatively individual style of the combo results in a fresh breeze and that's always a fine thing even though there has been no stench in the rooms of heavy metal before. Only the death metal lounge emanates a rotten smell, but this, you guessed it, has to be that way.

In view of the almost crystal-clear production, I do not have any complaints concerning the technical implementation of the eight compact and robust tracks. Hopefully the band is able to make itself free from some useless stereotypes, because the artwork is nothing new and the same applies for taciturn song titles such as "War" or "Beer". Moreover, the latter is almost a misleading name, because Steinbock do not deliver the noise for your next boozy orgy, but a maturely designed, excellent riffs featuring highlight. These dudes take their music seriously and therefore we are well advised to take them seriously, too. And that's not difficult as long as they keep this elegant yet powerful mix of melodic and aggressive elements. Not to mention their instinct for the right amounts of ideas per song. The tracks are neither overloaded nor too simple. Maybe some of you know the Slovenian Battle X, Till the Limit sounds a tad like their "Imminent Downfall". For those who do not know this formation, I have another point of reference, the black album of Metallica. This is a band most of you know, I'm sure...