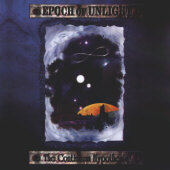 Scandinavian black metal is an anomaly in the United States, and quite a rarity in the American south. Rarer still is a thrash-influenced black metal band that writes excellent music. I would have never heard of Epoch of Unlight but for some New York alcoholics who babbled about them on IRC. That’s a serious shame; with such an impressive album as The Continuum Hypothesis, Epoch of Unlight deserve far more recognition than they’re getting.

On the black metal continuum, The Continuum Hypothesis wavers between Ancient’s The Cainian Chronicle, Immortal’s At the Heart of Winter, and Twin Obscenity’s Where Light Touches None, though with a stronger thrash influence. If you lack exposure to those, you could consider their influences evenly split between Dissection and Dark Tranqulity, but that’s a mediocre comparison. Epoch of Unlight use scales reminiscent of their Swedish brethren, but their song structures are quite distinguishable. This album includes touches of everything from Emperor’s trademark dissonance to Exodus-derived Bay Area thrash. While it isn’t the most innovative idea to write Scandinavian black metal with ominous midtempo segues, they do a remarkable job creating it.

What sets this album apart from their early material – and from that nameless legion of Scandinavian black metal prestidigitators, who keep getting prison terms for stabbing each other – is that it’s mature, sophisticated and interesting. Epoch of Unlight always showed phenomenal prowess, then churned out largely anonymous songs. Not this time. Their potential realized, most of this album is impressive enough to remember, and multifaceted enough to keep their material fresh after a dozen listens. For instance, “Aberrant Shadows” is an impressive thrash metal song with an atonal scale, while “Cardinality” is reminiscent of Ancient’s “Prophecy of Gehenna”.

Aggressive, sophisticated, relentless, and outstanding – that’s a condensed description of The Continuum Hypothesis. This album merits recognition as an incredible black metal album, possibly the best example the United States has yet created. Stop waiting for the new Dissection. Get this instead!