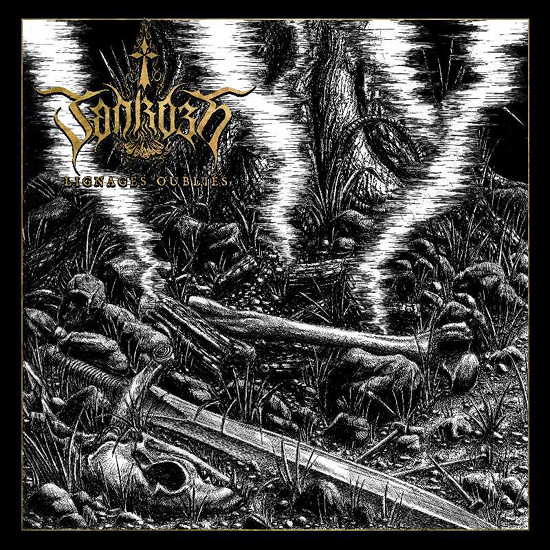 So far given my experiences with French black metal I've had little to complain about; they get what the genre is and how it should be played and have never really abandoned the antiquity of such, for the most part in opposition to a few wrongdoers I won't mention. Their musical sketching has always seemed to be in a space of its own and never cared much for what others were doing in turn helping them to manufacture the most authentic interpretations of their visions. Experienced hands steer what has come to be Tan Kozh's debut titled Lignages Oubliés put out by Antiq Records which takes pride in producing serious efforts. Comprised of Les Chants de Nihil, Belenos and Way to End member/s with a guest from Boisson Divine providing a guitar intro on 'Equinoxe', this debut effort from the band could easily be one of the best pagan black metal albums of 2019.

Tan Kozh knows precisely what they want to accomplish here, though there is considerable variety in the songs played. Lignages Oubliés covers some aspects of ancient Indo-European myths but does not bend or incorporate strange sounds to get their point across. The immersion factor lies within the functionality of the music and the way its attired. There are many fluctuations and diversions in pacing controlled by the drumming. Deep growling vocals covered with landscaping guitars offering tremolo or mellow picking meet the clear thump of blast beats heard on 'De Brest à Brest-Litovsk' and 'À La Gloire D'Indra' reminding the listener they haven't forgotten to make black metal music. Thus, said I would have liked to hear some traditional instruments played to evoke that sensation in keeping with the theme of Indo-European ancestry, especially for such a well-paced and fluent record, perhaps some acoustic or exotic instruments in addition to the chanting to augment the music. The tantric humming heard on some songs help with this but could have utilized some instrumental assistance; hence I surmise Tan Kozh wanted the music to remain authentically black metal by excluding those facets. However, the absence thereof does not deter the enjoyment on Lignages Oubliés which brings me to the album length that in spite of being 44 minutes moves quickly.

I blame the immersion settling on each track that has its own rhythm and groove at times fixed with hard and punk rock appeal as on 'Ecce Homo', '...Et La Haine Nous Sauvera Tous' and 'Sacrifice' respectively. While you'll be pleased to find Lignages Oubliés modeling on the path of black metal, hard and punk rock, there's rarely a moment the music displays idleness; as implied beforehand, the band members are knowledgeable enough to manage the direction conclusively. The atmosphere on Lignages Oubliés is controlled by the riffs and Tan Kozh has quite the showing. From 'Troisième Fonction' right down to 'A La Gloire D'Indra' (even on the interlude) you'll get your fix; 'Viens à Moi' and 'Imprécation' feature favorites of mine which make sitting through the record a rewarding experience in expectation of those tracks. I really can't recommend Lignages Oubliés enough, it’s a clean cut record, compacted with Herculean compositions coated with the French black metal identity.