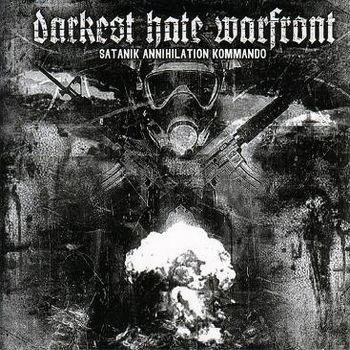 Do you want some stereotypes? Okay, here come Darkest Hate Warfront. Not enough? Okay, the album is called Satanik Annihilation Kommando. Ah, now I hear you begging to stop the overuse of buzzwords. But I am merciless, prepare yourself for song titles such as "Satan's Cult of Terror" or "Possessed by Fire" (by the way, no cover of the Exumer classic). So now welcome to the slaughterhouse, like Dark Angel used to say.

Darkest Hate Warfront are naturally no musical snobs that like to present the most sensitive music you have ever heard. Instead, they have created an electronic thunderstorm. The bombardment consists of a distorted voice, mechanical drum hammering - the programmed drum machine gives all it has - and hellish guitars. Maybe a bass guitar can also be find somewhere in this noisy inferno, who knows. Full force ahead is the only ideology that the two dudes from the Brazilian jungle accept and the inhuman drumming is mostly absurdly fast. A slightly less stubborn mentality would have been no mistake, not at least in view of the one-tone-nagging of the lead vocalist. However, the guys perform their form of devastation with conviction and pride. Variety is written in very small letters, but the measly playtime of only 28 minutes leaves no opportunity to think about such minor flaws. The hail of bullets numbs each and every brain cell, at least if you do not have more cells than I have. But I am sure you have more...

Highlights? Do me a favor and don't ask for highlights. I am glad that I am still alive (even though my brain still doesn't work). All songs barrel along a road which is lined by impaled heads. Some of them still wear their gasmask. On a more serious note, this is exciting in its own way and I know albums which are much more annoying. Nevertheless, this record dishes up an absolutely one-dimensional approach that fails to meet my understanding of good music. The first song that offers something like structure appears on the eighth position, but the infantile constant fire of the snare gives this number a slightly surreal touch as well. Thank God that they do not focus on industrial elements as well in order to reduce the musical trace elements to absurdity. Even without focusing on industrial components, the mix does not sound very organic, but it is still acceptable.

I am loyal to those musicians who try to explore the extremes. Too harsh is always more likeable than too soft, too commercial and too consumer-friendly. That's why I can give a pretty high rating, even though I am still not quite sure whether or not I like this approach at all. Either way, if you want to play the role of the toughest guy in your neighborhood or if you are looking for a more extreme form of Ad Hominem, this one is for you. Everybody else should consult his doctor before she or he lends an ear to this monster.