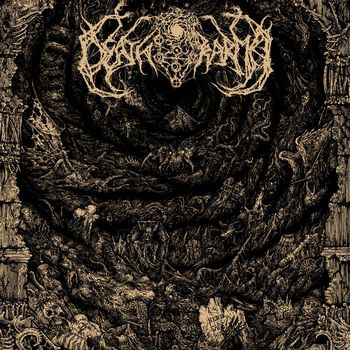 Before they began to sing about happy things such as the history of death and burial rituals, Death Karma from Slovakia released this EP with a playtime of nearly 18 minutes. The four songs already indicate the dramatic configurations of their later works and they lack neither power nor velocity. Both sinister and theatrical vocals appear, the keyboards contribute some atmospheric sounds, but the guitars are always at the sharp end. All these components are well caught by the dense, slightly horrifying production. Death Karma concentrate on the darkest sides of human existence and this is getting quite obvious when listening to the somehow nightly basic tone of this mix. In addition, they sound comparatively original, even though they do not present unique innovations. But the two grandmasters of darkness avoid walking those paths which have been walked by thousands of other bands before and they add a grain of individual insanity.

While being on a high quality level right from the beginning, the EP passes by without remarkable ups and downs. Only some film excepts appear as a foreign body and disturb the intense and more or less infernal aura of the material. All songs benefit from a compact design, aptly hammering of the drums and a nice quantum of more or less shady melodies. Those who like their albums or the comparable outputs of Cult of Fire, have no reason to stay clear from this material. In their best moments the songs generate a black maelstrom that tries to take possession of the listener. This is definitely no debut by semi-professional newcomers, these compositions make sense and can rely on their effective guitar work. No doubt, A Life Not Worth Living constitutes a good warm-up for the following history lessons.