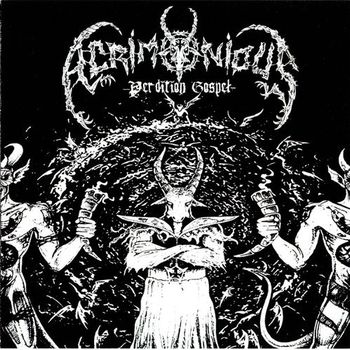 The Greek contribution to the evolution of Europe's culture is beyond doubt and maybe some musicians from Athens and surrounding feel commitment to this heritage. Acrimonious do not offer great philosophy, but they recorded a nice EP in 2006 in order to enrich the European black metal scene. Unlike some of their comrades from Greek, they avoid an extra-portion of ritualistic sequences. However, the music has an occult undertone and already the first guitar tones of the opener play with morbidity. The two dudes perform a more or less orthodox type of black metal. The extremely distorted voice is accompanied by well-produced guitars and drums that commute between mid-tempo and fast hammering.

Perdition Gospel was the first official release of the duo and given this situation, the four tracks surprise with a high degree of maturity. The songs do not lack tempo changes, but all parts fit together. Let's pick out "On Serpent Wings". It scores with rapid rhythms that unleash an adequate storm, but its skillfully galloping mid-paced sequences are no less dangerous. The leads achieve a more than solid quality and the entire track emanates a tyrannical mentality - just like the whole EP, by the way.

I cannot deny that the four tracks lack outstanding features. This mid-harsh form of black metal is not overly spectacular, and one can rightly say that we have heard this many times before. It's surely true that some Scandinavian bands, Immortal, Setherial or Ancient, have been an inspiration for the musicians. Nevertheless, each genre has its characteristics and therefore it comes as no surprise that a new formation does not invent the wheel once again. Therefore, I do not hesitate to recommend Perdition Gospel to everybody who generally likes black metal, because Acrimonious prove their competence to pen, produce and perform tracks that do not violate the rules of this style. And we have to keep in mind that any cultural contribution from Greece is worth testing.