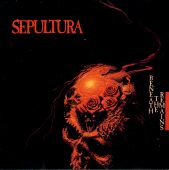 Unrelenting! A masterpiece! Pure metal brilliance! Is that enough praise for you! Hopefully, because does this cd ever give the goods or what! Straight off the heals of their monumental album Schizophrenia, Sepultura are back with are bigger and better album Beneath The Remains! It is an album stuffed with power and talent that speaks well for the band's credit! This is the band's first album with Roadrunner records and is really the beginning of it all for the band. For 1989, this was one of the top thrash metal albums of the year and is said to be able to hold its own up there with the likes of Slayer's Reign In Blood album and who am I to disagree!

Bottom Line: Sepultura fan or not, NO Metal fan is to NOT have this album! It is a landmark not only for the band, but for the thrash/speed metal genre!