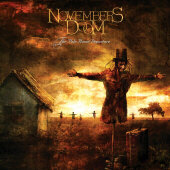 Came across this CD completely by accident while browsing in one of my favourite music stores one lazy Saturday afternoon. It was one of those chance findings that end up making me simply smile. What I found, once purchasing it, was a bonafide Doom classic from start to finish.

The vibe on the album was stark, bleak and totally scary from the start. Vocals that changed between hauntingly clear and eerie to blowtorch grinding grunts... made each and ever note and word strike like the hand of God from this little shiny disk.

The guitar parts that are heavy as lead to the point of bludgeoning in it's power, then would free fall into the ethereal acoustic sounds that were goosebump inducing with each note that seemed to flow out. Every lovingly crafted sombre beat helps weave the lyrics haunting story together into a Doom Metal masterpiece that both scares and entertains.

I missed this album when it actually came out in 2005.. for that, I have to kick myself repeatedly really hard. Novembers Doom is a band that can and will be remembered for this one. A sombre, ghostly album... that is worthy of more than a few listens.

For years while everybody was praising November’s Doom, I was idly watching, taking enough of an interest to listen to what everybody was so enamored by. However, for me November’s Doom has never quite bridged that gap between good and great. Let’s be honest here kids – these doomster’s don’t exactly have the best track record when it comes to writing cohesive, congruous albums, or even full songs for that matter. The material might have been good, but if it’s barely being held together that presents a problem. With that said, I figured there would be a day when they got it right. Their latest offering The Pale Haunt Departure is it.

Pursuing the melodic death/doom avenue that so many bands travel, November’s Doom don’t achieve success through being original, but rather by simply doing what they do better than the rest. Indeed there are many band’s that run alongside November’s Doom: Opeth (although they’re far less doom-influenced), early Anathema and Daylight Dies are excellent examples. However, November’s Doom music is branded with their signature; you won’t be confusing anything you hear by them with another band.

The question remains: exactly how do they beat out the competition? For starters, there isn’t one single section on The Pale Haunt Departure that is dull or disappointing. The ideas presented are fantastic. More specifically, the cleaner, more melodic, as well as acoustic sections are excellently crafted, presenting creative ideas that don’t sound like they were written by some metal dudes that only picked up an acoustic guitar because they heard one of their favorite band’s do some arpeggios. In other words, the music in these sections sounds natural, not forced, and it’s actually quite tasteful. On the other side, the heavier moments, while still melodic, are intense and full, something aided by the great production, courtesy of Dan Swano. When combined with the songwriting to pull it all together, you’ve got a winning combination.

There is another element in The Pale Haunt Departure that seems to be absent in a lot of music these days, and that would be inspiration, heart, soul, or whatever you want to call it. November’s Doom play and sound like they’ve actually taken the time to work out the small details that are often overlooked, and it shows. Not only that, but when the guitar’s rip into a solo or vocalist Paul Kuhr uses his befittingly morose clean vocals, there is a sense of ambition behind it. The emotion is present, and as a result, the atmosphere is drawn out. The result is great.

As for now, November’s Doom has caught my attention with The Pale Haunt Departure by doing it better than the bands standing on the same playing field. Maybe next time they’ll play it a little less safe and venture into some unknown territory. But for now, let’s just all enjoy what is undoubtedly going to end up on everybody’s top ten lists.