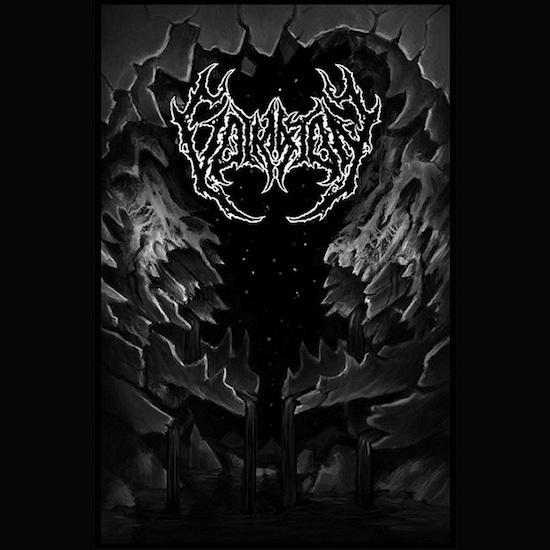 Death metal trio Voimaton conduct themselves a bit differently in comparison to the scores of new bands being formed. What they are getting their hands into and the way they are going about it calls for some recognition. Titled Demo 2019, the Chicago based group stands cemented in the mucky foundations of death and doom metal the old 90s way but with some pleasant additions and peripheral clarity to make-out what's moving about the mist. Most likely your first reference will be Incantation and Asphyx once hearing this debut demo and you'll be right; however, I find potential for expansion in Voimaton's methodology, particularly in their doom metal characteristics. This 16-minute demo shelters itself under the roof of the genre amidst a time of self-discovery but takes a step closer towards embracing a slightly risky approach whilst settling in the territories of Swedish, Finish and American death metal with some hardcore and stoner doom elements.

On this demo Voimaton appear to be establishing or seeking the right stance regarding their sound and technique; almost like building a recipe in search of what works and what does not. Thereby, a bit of character is to be heard in the recordings with ‘Erudition’ exhibiting the makeup through that HM2 Swedish tone, the hardcore midtempo in groove and their steady juggle among the thrash, doom and death metal aspects. Even a bit of stoner doom lifts its fuzzy head on the opening moments of ‘Primal’ which leads towards a hardcore, bruiser-style of playing, whilst ‘Apotheia’ borrows a bit of the stoner traits to stitch into its fabric. And in closing, Voimaton then choose to stay within the muddy, motionless tracts of doom/death metal, thereby providing an implication stating the backbone of their music is still under development.

Voimaton’s overall approach is predominantly death/doom metal but with the addition of some miscellany. What I admire is the way each element progresses and grooves into the other, such as on ‘Primal’ that is seemingly the best of the 3 tracks. Rather climatic and better written in comparison to the other tracks, hence this highlight should remain as a keystone of Voimaton’s future recordings. As said before, the band seems to be getting a feel of things, that’s the purpose of a demo, and with a head filled with ideas, Voimaton are certainly playing with their potential. The will to expand their sound is present throughout the demo, what remains to be heard is how and what elements will be selected and utilized as staples of their identity.